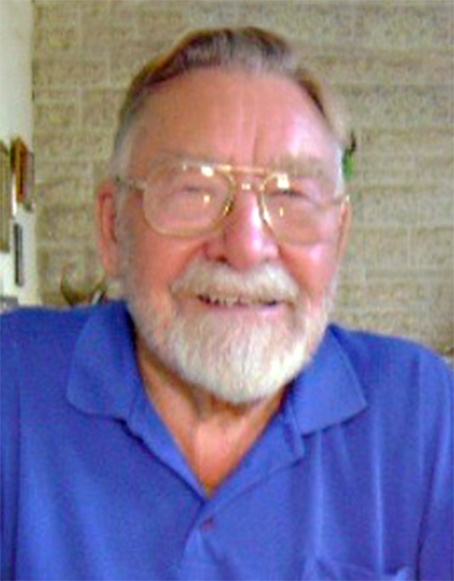 On July 25, 2021 at Altona hospital, William “Bill” Rolls passed away peacefully at the age of 95 years.

Bill was born in England and grew up in Islington with his brother and parents Henry Edward and Annie Louisa. At the age of 14, he started working at the Beeston Foundry. In 1942 he joined the Navy and started working as a radar mechanic and later became a radar engineer on the HMS glory, a light fleet carrier. It was during his time with the Navy that he developed his love for sunshine and traveling.

He immigrated to Canada in 1956. He stayed in Ontario for a while to finish his masters in psychology before moving on to different provinces. He never stayed in one place for too long.  He eventually travelled to Pohnpei and lived there for three years.

He finally settled in Emerson and became part of the Emerson Players Group and Emerson Legion #77 which he both enjoyed.  He vacationed in Cuba for almost 2 weeks every year to bask in the sunshine while it was so cold in Manitoba. He was a fantastic gardener. The yearly Thanksgiving supper at the Southgate Haven was from the bountiful harvest he had from his garden and was shared by friends the neighbors. He liked to play cribbage and bridge, most of the time his score was the highest according to his card mates.

Thank you to the following people, groups and organizations who had cared for, looked after, and supported Bill in his last years. Dr. Moheb Basta, the staff and nurses of the Altona Hospital, Altona Home Care Program, Altona Palliative Care team, Emerson Legion #77, Kip Fraser, dear friends Waldo and Lorna Thiessen, and the Eastview Place chaplain Levi Froese.  To other friends I may have forgotten who remembered him in their own way, thank you.

Donations in memory of Bill may be made to the Emerson Legion #77, or to the Salvation Army.

To order memorial trees or send flowers to the family in memory of William "Bill" Rolls, please visit our flower store.