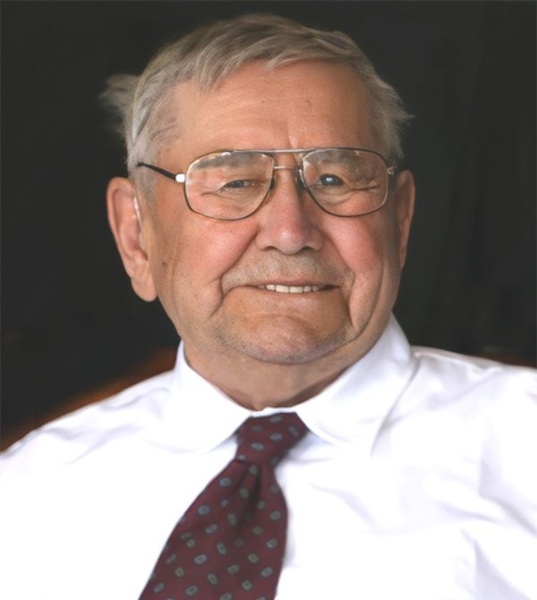 The Obituary of Bill Ginter

(As told by our Dad, Bill Ginter)

I, Bill, was born on June 14, 1927 in Wiedenfeld, two and a half miles southeast of Rosenfeld to Corny and Aganetha (Peters) Ginter.

I attended school in the same district. I started school when I was eight years old. We often took horse & sleigh to school during the winter months. Sometimes we got a ride with the cream truck. In summer we walked the 2.5 miles to school.

The land on which we lived was a 10-acre lot that belonged to the J.C. Nickel Family.

One day we had a ride with our old car. There wasn’t room for me in the car…too many children, so I had to stand on the running board. I thought the driver would not stop so I jumped off and rolled and rolled into the ditch. I was not hurt but was very dizzy.

In 1938 we moved to Reichenbach near Rosenfeld. We lived there until the spring of ‘42 when we moved our house and barn to the Thames district.

In 1944, I worked with a threshing gang. We went to different places and did different jobs. One place I worked, driving the team of horses, was at the Corny Stoesz farm. I was told to go in for supper where they served pigeon. Two of the Stoesz girls (one was Betty) took a ride on the hayrack from the field to the homestead. I stayed for the night, sleeping in the living room. I remember being in bed and hearing these two sisters playing guitar and singing. They sang “Cheer up my brother, live in the sunshine, we’ll understand it all by and by.” I was touched by the song and the nice girls.

In Fall I had my first date with Betty…now my wife.  She then informed me she was too young and had to wait till she was 17. We still talked at church and at choir practice. In March of ‘47, the month of Betty's 17th birthday, we started to date, but only on Sunday evenings. We dated for a few years.

I married the love of my life May 1, 1949. There was rain, rain and more rain until the evening after the program. We got a ride home with Betty’s parents, until their car plugged up with mud. Henry, Betty’s brother, came with a tractor and a high trailer behind it and we all climbed in and went home.

Mr. Nickel offered us a job, I worked on the farm and Betty as a maid. Shortly after that, we bought a house for $700.  It was a small 14x20 house, which we then moved to the J.C. Nickel farm where we lived for five years. Our first child Harvey arrived in the Spring of 1951. In ‘54 we moved to Rosenfeld and bought a house with the help of J.B. Nickel just before our second child Wayne arrived. We had 3 more children –  Diane, Donald and Leroy.

Dad attended the Bergfeld Church, where Dad was baptized upon his confession of faith. Mom and Dad would move to Winnipeg for the first couple of winters for Dad's employment.

His places of employment included…  J.B. Nickel’s in the seed cleaning plant, Wajax, Pioneer Electric, Washington Cabinets, Northend lumber as a carpenter, Beaver Lumber, taping and painting with Jake Unrau & Dave Stoesz. In 1975 he started a partnership with Harv building many houses. Later he worked with Wayne, Donald and Leroy. Dad had to retire early due to an arm injury.

Dad enjoyed his workshop and did a lot of small projects – Purple Martin houses and toys for his grandchildren. He used his lathe and turned many a bowl and gave them to us for Christmas. He also built lamps and small pieces of furniture.

As they got older and their yard became too much for them, they moved to Altona and made their home at the Katherina Courts.  They then moved to The Gardens on Tenth and their last move was to Eastview Place.

This last Monday Dad became very ill and on Saturday morning, March 26th God called him home, peacefully with family by his side, only 15 days after his beloved wife of 72 years passed away.

Funeral service will be held on Wednesday, March 30, 2022 at 11:00 a.m. at the Altona EMMC Church, with burial at the Bergfeld Cemetery.

Livestream of the service is available by clicking the video link below.

Donations in memory of Bill may be made to Seeds of Hope.

To order memorial trees or send flowers to the family in memory of Wilhelm "Bill" Ginter, please visit our flower store.