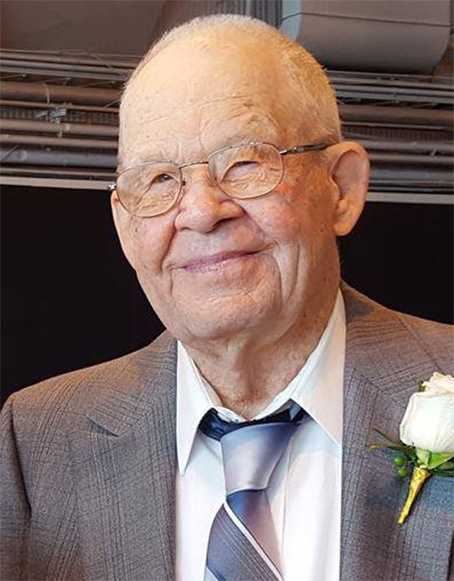 Wilf Felsch, age 93, formerly of Ridgeville and Emerson, Manitoba passed away on Tuesday, July 14, 2020 at the Grace Hospital. He is survived by his wife Nola, his sons Robert (Carol), Leslie (Celeste), and Charles (Shelley), as well as 8 grandchildren, 9 great grandchildren, and 1 sister, Margaret. He was predeceased by his wife Evelyn in 2008.

Dad was born on the farm near Ridgeville. He was the first of two children. He went to school at Springbank two miles away and finished grade twelve in Morris. He tells a story of going to Orleans Minnesota at the age of 16 to load, haul, and pitch sheaves into a thrashing machine for a family friend. A lot of young American men were drafted and were at war therefore workers were desperately needed. “Never ached so much as I did after the first day” he said. He drove truck for his dad’s Ridgeville Transfer business, picking up and delivering freight, livestock, and supplies. In 1950, he started driving taxi for the Moore’s Taxi Company in Winnipeg. He did this for 14 winters to supplement his farm income. In November of 1954, he married Evelyn Berg. They farmed in the Ridgeville area and dad continued to drive cab during the winters. Three boys were born between December of 1955 and February of 1958. The family started moving to Winnipeg for the winters and returning to Ridgeville to farm in the summer. In 1963, dad bought land that would become the center of a successful farming operation. In 1982, dad started spending time in Arizona. He bought a home in a trailer park in 1991 and spent every winter there up until 2016. Dad was very proud of the milestone of being a “Century Farm”. That was one family owning a homestead for 100 years. In 1988, dad retired from farming and moved to Emerson, where he lived for twenty years, before moving to Winnipeg. Even though he no longer was involved in farming, his interest in it never left him until his death. He was very active in the community. In the early years, he was president of the curling club, was a director for Manitoba Pool Elevators, was a 4-H leader, and was on the local Co-op board. Later in life, he was involved with the New Horizons in Emerson and helped out with meals on wheels. In 2008, he lost the love of his life. His wife of 54 years, Evelyn, had her life cut short. Dad was distraught. Life would never be the same. The next year he became good friends with Nola Brown. They had a lot of common interests. They hit it off and eventually moved in together in Winnipeg. They were together over 11 years. They continued to winter in Arizona and later for 3 winters in Osoyoos, BC. Dad said to me, “I have been truly blessed to have had two great women in my life.” Dad had a unique laugh. If you heard it, you didn’t have to ask who it was. Everyone knew he was in the room. He loved to play cards and watch sports. He would play cards four and five time a week, then solitaire at home. He and a partner went to PEI to play for the Canadian Seniors bridge competition of Canada. He came home with a Silver medal. He was proud of that. He was an avid curler before moving to Arizona for winters and continued to watch all curling playoffs after travelling with Evelyn to many of the world curling finals in person. He seldom missed a Blue Jays game. He knew every player and as he did in life, had an opinion on most everything the team did. He also loved the Arizona College basketball team and the Winnipeg Jets. Dad had a theory on life and he told his boys on numerous occasions “You only have one reputation in life. If you lie and cheat and swindle, that will be your reputation for life, nothing will change it.” I think dad did his best to have a great reputation.  In a conversation with me weeks before he died, he said “I’ve had a great life. We all make mistakes, there is only one perfect person and he died for us”.

A funeral service will be held on Thursday, July 30, 2020 at 2:00 p.m. at the Zion Lutheran Church, Friedensthal, with ash internment at the Friedensthal Cemetery. Social distancing will be honored and a FM broadcast of the service to your car will be available if you chose not to enter the church.

Donations in memory of Wilf, may be made to Cancer Care Manitoba, or the CNIB (Canadian National Institute for the Blind).

To order memorial trees or send flowers to the family in memory of Wilfred Felsch, please visit our flower store.