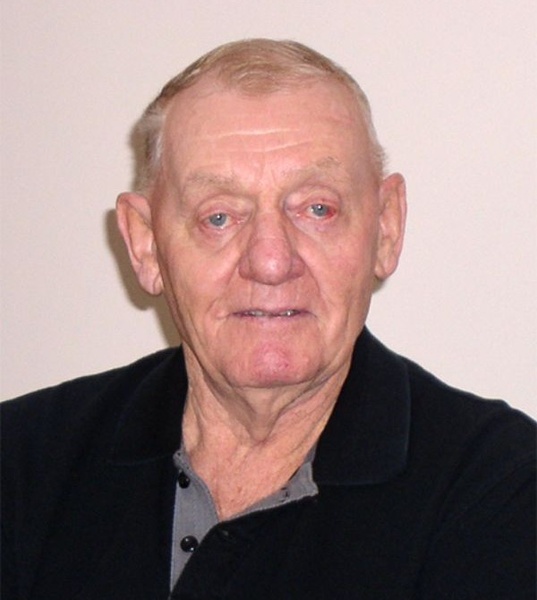 Jerry Wilbert Funk, long time resident of Altona, Manitoba passed away peacefully and moved on to his eternal home in the early hours of the morning of January 18th.

Jerry is survived by his loving wife and best friend of over 73 years, Sally, and children Richard (Sharon) Funk, Jean Ritter, Ron (Bev) Funk, Laurel (John) Rudolph, Murray (Robyn) Funk, and Myra Moule. His 22 grandchildren remember him fondly as the incredibly imaginative storyteller and endless supplier of smarties making him the “smartie grandpa”! His love for his 40 great grandchildren was always apparent by his interest in each one specifically. He was a proud man when he became a great great grandpa in 2018.

Left behind until their names are called are step-brothers Dave and Art (Betty) Stoesz and stepsisters Kathy (John) Dyck and Helen Dueck. There are many nieces and nephews and great nieces and nephews who will also miss him. He leaves behind many fans and friends who were blessed to know him!

Jerry Wilbert Funk was born in Winnipeg November 22nd, 1929. At the age of 2 he and his parents moved to the farm a couple of miles west of Altona. Dad was about 6 or 7 when he realized what was happening around him as they experienced the dirty 30s. The family lived off the farm produce and grain. The crops were small but there was enough to feed the cattle. His father's philosophy was “work hard so there was food on the table and clothes on your back”. When dad asked for money there was none to be had so his father said he could sell pigs and chickens if he raised some. His father supplied the feed.

In the spring of 1937, when he was 7, Jerry began school. That time from Easter through June was the equivalent to Kindergarten. That fall he began Grade 1. He travelled to school in Altbergthal by horse and buggy. School ended at the age of 14 when it was time to become a farmer because he was the oldest child. Because his mother was blind he was also needed inside to help her. From her he learned to be precise and very clean.....floors needed to be washed and waxed and her hands acted as her eyes. There were times when these jobs needed to be redone! Jerry was happy when a maid was hired! A story has been told of him and the hired hand having a competition to see who could eat the most eggs. Jerry ate 2 and a half dozen and the hired man ate 4 and a half dozen. So how many eggs did each of these men eat?

Jerry and Sally started school at the same time where they had the common love/hate relationship: Sally calling Jerry names and Jerry chasing her, throwing clumps of dirt, and also dipping braids into the ink. Sally called Jerry a “red headed flicka” and that wasn’t received too well!

In school they always had art and Jerry shared a story about his endeavours. One fall a huge basket of vegetables was placed in the front for them to draw. They each received a large piece of paper so dad began his project. He drew a small basket in the middle of the large page and when he was asked why it was so small he said then he didn’t need to put in as many vegetables! That way of thinking has made its way down through the generations!!

School in the winter had highlights. They created a rink on the creek and the teacher and boys played hockey; sometimes lasting to the last recess.

Jerry's father, Dietrich, coached the senior soft ball team in Altbergthal so if there weren't enough players he'd put him in. Because he was shorter than the men he was usually walked.

Jerry and Sally began dating at the age of 16. They would often gather in the village and hang out in groups. In 1948 Sally's parents were moving to South America. In order to avoid having to leave Manitoba, she asked Jerry if he'd marry her.......didn't check if this was a leap year! If you've seen pictures of our beautiful Sally, you can see why Jerry said yes! They married May 26, 1948. After they married they lived on the farm at Jerry’s parents where he worked for 5 years.

Jerry was baptized in the Sommerfelder church in 1948 before their marriage. They joined the Sommerfelder church, but didn’t attend often due to divisions in the church. When he was on shift work the family went to the United church up the street. Later they joined the Altona Bergthaler Church where he’d grown up. His great grandfather, Johann Funk, started the Bergthaler church.

In August of 1953, they moved to Altona where Jerry began to work at the Coop Vegetable Oils: CVO. The 5 days he was hired for lasted 36 years. He began as crushing plant operator, then in the maintenance department where over time he became the maintenance supervisor. In later years he became the stores' keeper and was responsible for ordering parts. Much of his inventory was safely recorded in his head which proved a challenge when he approached retirement.

Jerry was active with the Altona Volunteer Fire Brigade for 10 years.

Golf became something that was added at the age of 32 when he went out to play with friends. At that time he saw it as an old man's game and only went if there wasn't work that needed doing. Sally then decided not to be a golf widow and took it up as well!

We know Jerry loved hockey! By the time he was 14 he played for the adult team in Altbergthal where they played other villages always at outside arenas. At this time he began as a forward. In 1949-1950 he played for Altona. In 1951 they became the Altona Maroons and won the Southern Championship. By 1960 they'd gone on to win 4 championships. He played more than 500 games in the southeastern league. Playing the sport led to coaching which dad did successfully. He coached over 1000 games in his 30 years of coaching.

Jerry played ball from 1940 as a pitcher as well as a utility player. In 1970 when he lost his hand in an industrial accident his pitching career came to a sudden stop.

His passion for ball saw him start umping at the age of 28 and continuing until he was 73. He umped over 2000 games in total and the year he turned 73 he umped 73 games. A fairer ump would have been hard to find as he umped westerns and provincials along with local games and tournaments. He told the story about a spectator that yelled “that wasn’t over the plate!” from the bleachers when he called a pitch a “strike”! He paused the play, turned around, and said, “I didn’t say it was. I called it a strike!” Much laugher erupted as he resumed play.

He took up a new role and drove for Rhineland Car until the age of 80.

If you were fortunate to spend time with Jerry, you would have come to appreciate his use of the word “Deutschland!” (Although spoken in low German) frequently! He could be a very expressive person!

As their children became adults and moved to other places, they decided it was more important to visit them and their grandchildren than to holiday in other countries. Many trips were made out west as well as 2 trips to Australia.

Jerry received many accolades and awards; this always with the support of Sally.

1960: Wilbert Funk Night where over 1000 people were present to honour Jerry and the family

1983: Sportsman of the Year at which time Danny Galivan, the Montreal Canadian broadcaster came to see Jerry at the plant when he was the speaker at a banquet.

1998: Citizen of the Year when he was then asked to throw the opening pitch at a Goldeyes game in Winnipeg.

2014: inducted into the Manitoba Baseball Hall of Fame

Jerry said that he lived life to the fullest and accomplished everything he’d wanted to do and that he wouldn’t change a thing!

Jerry’s passing leaves a gigantic hole in our hearts; but which of us can argue with God! He was gracious in allowing us to have him here for 92 years! Jerry was a leader by example and a man of humility always putting the other person ahead of himself. He was a hero to his family and to many of the young people fortunate enough to have him as a coach or mentor. He never spoke negatively to us about anyone and he was quick to squash anyone that did in his presence. He was solid as a rock and reliable and dependable! He ran a good race! Never a quitter he rose above challenges until his body failed to respond to his mind. Jerry began his slow decline in 2021 as his knees weakened…..many years of sports can do that! He wasn’t a complainer and when asked “how are you?” his answer was always “fine!” He wasn’t a liar but we did call him on this! His kidneys began to fail and then his huge heart of gold and kindness gave way. As his family, we were all able to say our goodbyes the day before he went to be with his Lord and Saviour. He was lucid to the end and joked with us and asked us to tell our families how much he loved them all! Those of us at a distance saw him on FaceTime about 8 hours before he departed and we were able to express our love and release. What a gift and privilege! Half of the Red and Precious team is left behind for us to love on! As a family, we’re hoping others will do so as well!

2 Timothy 4:7 “I have fought the good fight, I have finished the race, I have kept the faith."

Due to the present restrictions there will be no service or memorial at this time. There will be a public viewing at Wiebe Funeral Home Altona on Saturday, January 22 and Sunday, January 23 from 1:00 - 9:00 p.m. Cremation to follow.

Donations in memory of Wilbert may be made to the Heart and Stroke Foundation.

The family would like to thank the staff at the Altona Hospital for their kind and loving care our Dad received.

To order memorial trees or send flowers to the family in memory of Wilbert Funk, please visit our flower store.