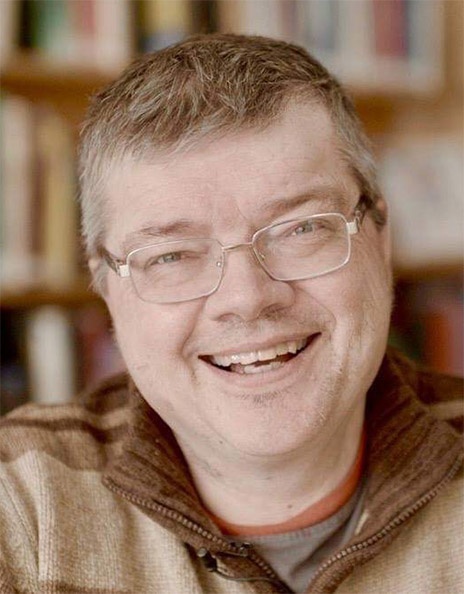 A loving husband, father, son and brother, George Timothy Wiebe passed away on March 14 at the Altona Memorial Hospital in the Palliative Care Unit with his loving family by his side after almost 2 years of suffering from brain cancer.

Tim was born January 14, 1960 in Los Angeles, California to George and Esther Wiebe. He grew up in Winnipeg (Charleswood), spending one year of his childhood in Detmold, Germany. As a child, Tim enjoyed reading, playing with his friends, playing hockey and table tennis. Later he took up basketball, and with the encouragement of his father, became an avid jogger, sometimes running 10 miles just for fun. Tim also played the viola in orchestras and a family string quartet, perfecting a method of practicing scales while watching muted TV.

Tim graduated from MCI in 1978 and from CMBC received his Bachelor of Church Music at CMBC, 1981, and Bachelor of Theology, 1988. He was baptized upon the confession of his faith as a teen in Charleswood Mennonite Church. Tim excelled in voice, having performed in a male quartet in the MCI Musical “Music Man. This same quartet performed throughout the next 35 years at various functions and became a source of enduring friendship in his life. He lent his rich and resonant bass voice in college recitals, oratorio performances, Music Festivals and on CBC’s Hymn Sing. Later he sang with the Faith and Life Male Choir, taking part in tours to Ukraine and South America.

It was at CMBC that Tim met his future wife, Marlene Kruger. They married in 1984 at Conrad Grebel College chapel, Waterloo and had three children: Emily in 1988, Steven in 1991 and Michael in 1993 who were all born in Winnipeg.

Tim served as staff at the Mennonite “Camps with Meaning” for 3 summers, during which time he wrote a binder full of stories for use in the camp Bible curriculum. Tim also served as Youth Minister at Charleswood Mennonite Church. He spent 2 summers in ministry summer at churches in Tofield and Niagara on the Lake.

He served as Music Minister at Stirling Ave. Mennonite Church in Kitchener for 3 years. Tim received his Bachelor of Education (University of Manitoba), his Masters of Theology (Conrad Grebel College, Waterloo) and completed the course requirements for his Ph.D. in Theology (St. Michael's College, University of Toronto).

Tim was passionate about Christian education having taught Bible, English, Choir, and Mennonite History at Rockway Mennonite Collegiate in Kitchener (3 years) and the Mennonite Collegiate Institute in Gretna (28 years). He integrated his love for Christ into his teaching with innovative assignments, extensive knowledge, wisdom and homespun style. He loved his students and was a memorable teacher. He read the Bible through thoroughly over thirty times.

Tim was an avid writer. His enjoyed broadcasting Timsights for Golden West Radio, CFAM.  A Timsights Treasury was published in 2004 to help raise funds for Buhler Hall. Tim spoke on many occasions in various churches, and celebrations like MCI’s 125th anniversary. He was a poet, and wrote the libretto for “Standing at the Crossroads” a musical composed by his mother which celebrated MCI’s 100th Anniversary.

Underlying his life’s pursuits, was Tim’s struggle with depression and anxiety. He also lived with a heart condition which caused him unrelenting worry and weariness. Medical treatment and counseling helped to alleviate the stress of these struggles.

Tim was predeceased by his infant sister, Miriam. He leaves behind to mourn his loving wife Marlene (Kruger), and his children Emily (Michael), Steven, and Michael, his parents George and Esther Wiebe, and his brothers Bob (Verna) and Peter (Ruth) and their families and his parents in law William and Helen Kruger of Saskatoon, SK.

Donations in memory of Tim Wiebe may be made MCI (Mennonite Collegiate Institute).

To view the service for Tim Wiebe click on the following link: https://www.youplayingsports.com/Tim-Wiebe-Funeral/

To order memorial trees or send flowers to the family in memory of Tim Wiebe, please visit our flower store.