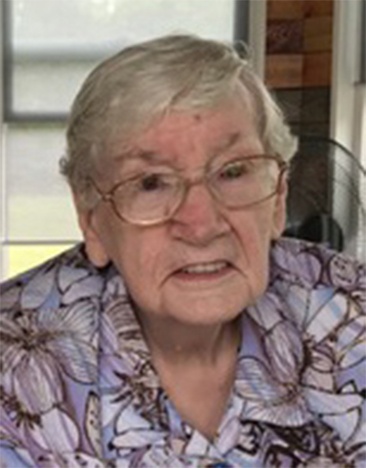 It is with heavy hearts the family of Thelma Winnifred (Robinson) Forrester announce her passing.  Thelma passed away peacefully at the Emerson Personal Care Home on Apr. 14, 2020 with family by her side.  Thelma will be greatly missed by her children, grandchildren, great-grandchildren and great-great grandchildren.

Thelma was born in Miami Manitoba to Cora & Sylvanus Robinson on Oct. 22, 1929.  She attended Mountain Glen school until Gr. 10.  Thelma relocated to Emerson to work in her brother Monty’s café where she was employed for 7 years.  It was there that she met her future husband James (Jim) Forrester.  Thelma and Jim were married Dec. 31, 1949, at the home of her parents.  Shortly after, they relocated to Lundar, and Bield, before finally settling on the family dairy farm in the Aux Marais district near Emerson.  In the early 70s Thelma and Jim left the farm and purchased a home in Emerson where she lived until 2011 when she moved into Dufferin Courts.  In the fall of 2017 Thelma moved to the Emerson Care Home. After raising her children, Thelma began working in the meat department in Sawatzky’s Store in Emerson.  She enjoyed her work at the store, and serving the public.  She especially enjoyed seeing new moms come into the store with their babies.  After leaving the grocery store, Thelma worked as the custodian at the RCMP station in Emerson.

Thelma enjoyed gardening, doing jigsaw puzzles, and cross-stitch.  She especially enjoyed playing cards with her friends and family.  No family gathering was complete until several hands of Canasta were played.  Thelma was a lifetime member of the Royal Purple and counted many members of the group among her good friends.  Thelma especially enjoyed working at the Elk’s/Royal Purple food booth at the Morris Stampede. Thelma enjoyed camping and travelling, especially a bus trip to Nashville taken with Jim following his retirement.  After her retirement she joined her friend Dorothy Wright on a trip to BC. Her greatest joy was her family and enjoyed huge family gatherings at her home, or on the farm.

Thelma was predeceased by her husband Jim in 2000, her daughter Patricia, her parents, her brother Monty and sister Beatrice, brother-in-law Pete Brandt, and sisters-in-law Joyce and Betty.

The family would like to thank all the staff at the Emerson Personal Care Home for all the love and care they showed to Thelma for the past several years. The Care Home staff and volunteers worked hard to make it a real home. Also the family is grateful for the tremendous support and comfort they gave during the final weeks of Thelma’s life.

A private family viewing will be held at this time, and a memorial service and interment will be held in the future.

Donations in memory of Thelma may be made to Emerson Personal Care Home Auxillary.

To order memorial trees or send flowers to the family in memory of Thelma Winnifred Forrester, please visit our flower store.