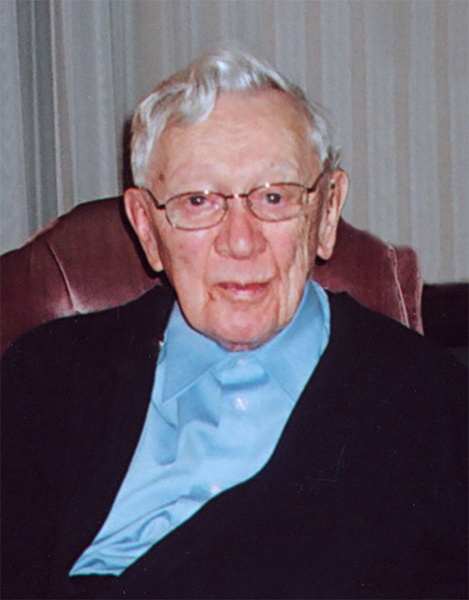 After a long, richly lived, wonderful life, Ted, age 95, passed away peacefully on the evening of February 15th, after a brief stay in the Altona hospital.  He is survived by the love of his life, wife Linie (née Krahn), married 70 years; by three sons: Eric (Susan) of Amherst Island, Ontario, Paul (Val) of Winnipeg and Tim (Pamela) of Altona, as well as 6 grandchildren, 14 great grandchildren, and one great great grandson.

Ted was born July 3rd, 1920, to David W and Sara Friesen of Altona.  He attended public and high schools in Altona, but in 1936, due to the Depression, he was forced to leave school and entered the family business full time.  Ted, along with his brothers, Dave and Ray, founded Friesens Corporation, now one of the preeminent printing companies in North America, based in Altona.  Ted was Vice President and Secretary Treasurer of Friesens, from 1951 to his retirement in 1986, heading its then Wholesale Stationery and Office Products Division.  Even after his retirement, he continued to take an abiding interest in the business, visiting the office almost daily, and taking pride in its continued growth and accomplishments.

Beyond work, Ted was defined by many passions.  He was born in Altona, and vowed he would live there all of his life, which he did.  Ted was an Altona patriot, proud of his community, its history, its characters and the many gifted people Altona gave to the world.  He was truly honoured to be named Citizen of the Year by the Altona Chamber of Commerce in May of 2000.

Ted was also a fervent Mennonite, grounded in the history and faith of his people, and active for many years on the boards of both Mennonite Central Committee Canada, and MCC Manitoba (both part of the worldwide relief and service organization of the Mennonite Church).  He was President of the Canadian Mennonite Historical Society from 1982 to 1996, and during his tenure they produced the seminal three volume History of the Mennonites in Canada.  In 1995 the Society presented him with their Award of Excellence.  Ted was a founding member of the Altona Mennonite Church and served as its Moderator for 17 years, and also as a Deacon.  During World War 2, honouring the Pacifist principles of the Mennonite Church, he was a conscientious objector.  Ted’s views, and those who enlisted, including his brother John, were very well documented in a 2002 National Film Board film, The Pacifist Who Went to War.

Ted and Linie travelled the world, pursuing Ted’s passions for music, visual art, architecture and history.  He was an avid classical record collector, and from young attended concerts and opera productions, and supported musical organizations in Manitoba.  He amassed a huge collection of art books over his lifetime.  History had been his favourite subject in public school, and his love for it never left him.  Not just Mennonite history, but a special interest in the history of the ancient world, particular that of Greece and Rome.  He was rarely without a book or magazine in hand, drawing from a huge personal library of German and English poetry, fiction and non-fiction.  All of this from a son of the prairie who never finished high school.

His final award, the 2010 inaugural Blazer Distinguished Community Service Award from Canadian Mennonite University, Winnipeg, was a tribute to the whole Ted Friesen, citing as it did achievement and service in the church and the broader community through business leadership, artistic, political and voluntary contributions.

Ted was a warm, caring, generous, thoughtful man, with a great sense of humour, who loved nothing better than to visit with family and friends; old-timers who lingered at the Altona mall; employees of Friesens young and old, senior and junior; and all those he had befriended through his active life of business and service.  He was a man who loved much, and was much loved in return.

The family wishes to thank Dr. Bueddefeld and the staff of the Altona Hospital for the superb care given to Ted during these past weeks.

A celebration of his life will be held on Saturday afternoon, February 20th, at 2 PM at the Altona Bergthaler Mennonite Church, with interment in the Altona Cemetery. Visitation at Wiebe’s Funeral Home, Altona, takes place on Thursday, February 18th from 9 AM to 9 AM, and again on Friday February 19th from 9 AM to 6 PM.   In lieu of flowers, the family encourages contributions to the Mennonite Central Committee.

To order memorial trees or send flowers to the family in memory of Ted E. Friesen, please visit our flower store.