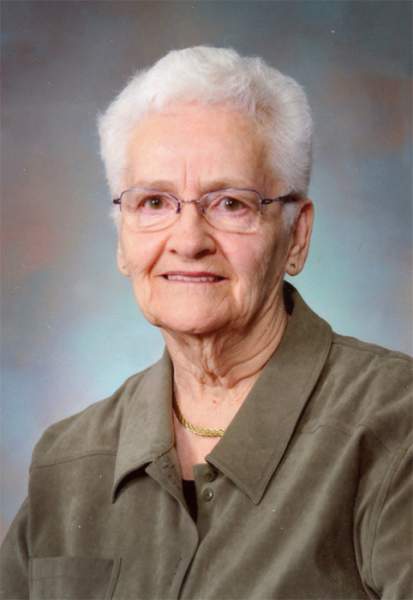 Susanna Klassen of Altona formerly of Morris and Lowe Farm passed away peacefully, with family at her side, at the Altona Hospital on May 12th 2015 at 12:30 in the afternoon, at the age of 78.

Susie was born in Lowe Farm on September 28th 1936 to Isaac P. and Aganetha Klassen. Her father was born in Chortitz, Russia. Her mother was born Aganetha Neufeld in Kronsthal, MB. Susie was the second youngest in the family and had 9 siblings.

She attended school in Lowe Farm and was baptized at the Kronsweide Sommerfeld Church in May 1956. She married Peter H Klassen on September 28 1956 one week before her 20th birthday.

In her younger years, Susie was an avid baseball player in summer and enjoyed curling during the winters. As so many women of her day she was extremely talented with anything having to do with handiworks like sewing, crocheting and knitting. Susie and Peter enjoyed travel. They made several roadtrips out west to visit family and tried to attend as many weddings, anniversaries and funerals as they could for nieces, nephews and siblings. They enjoyed many other trips as well to various parts of the United States. They followed Brenda to several Special Olympics competitions in places like Vancouver, Halifax, Alaska and PEI.

Susie was a faithful volunteer at the MCC thrift stores in Morris and Altona for many years. She was also a member of the Kronsweide church ladies group.

She worked for several years in the Morris Hospital, first in the Housekeeping Dept and then in the kitchen. She made many life long friends there.

When the grandchildren came along (finally!) she was kept very busy attending their music festivals, dance recitals, Christmas concerts, dramas, musicals and programs.

Susie was tireless when it came to looking after her home and her family. She enjoyed hosting friends and family and really knew how to put on a spread. Even after Peter passed away, she remained active and interested in everybody's lives.

In August of last year Susie suffered a massive stroke which permanently restricted her speech and the use of her right arm. With intensive therapy she made many gains and was able to walk using a cane. We were looking forward to testing out a communication device which we hoped would allow Susie to express herself more fully. Unfortunately, Susie didn't get a chance to try it. In March, she began experiencing serious health issues and eventually we learned she had cancer. Due to her risk factors, no treatment was recommended.

She was able to enjoy some precious time last month with her baby brother, Ed and his wife from BC, her last surviving sibling. We so appreciate that they were able to travel here in spite of having some health issues themselves.

Susie is survived by four daughters Laura, Sheila (and Bill Tiessen), Brenda and Evelyn and one son, Michael (and Anna Lazowski) and four grandchildren: Rebecca, Zachary, Silas and Lila. Susie is also survived by her brother Ed of Armstrong, BC; a brother-in-law, several sisters-in-law and many nieces and nephews.

We extend our sincere appreciation to the staff at the Altona Hospital, St Boniface Hospital, Boundary Trails Health Centre and at the Riverview Health Centre Stroke Rehab Unit for the excellent care Susie received.

To her many relatives and friends, we know Susie appreciated your visits even if she couldn't express that verbally.

A funeral service was held at the Altona Sommerfeld Church with interment at the Altona Cemetery on May 15, 2015. In lieu of flowers, donations may be made in memory of Susie to Blue Sky Opportunities Inc., PO Box 330, Altona, MB, R0G 0B0.

To order memorial trees or send flowers to the family in memory of Susanna (Susie) Klassen, please visit our flower store.