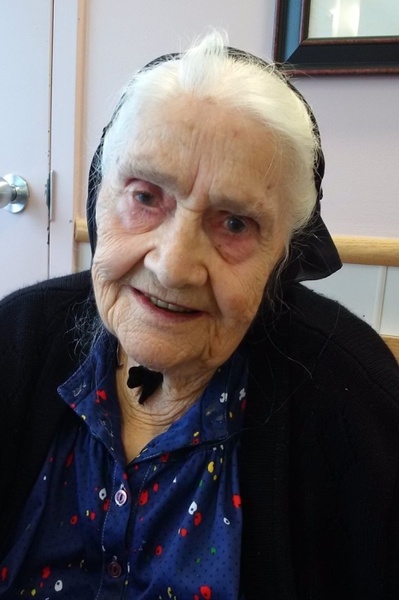 Susanna Reimer Reddekopp was born Susanna Enns on June 7, 1919 in the village of Kleefeld. Her parents were Peter and Helena Enns.  She was the oldest surviving daughter of 13 children.

In the early years of her life the family moved extensively but later came to settle in the town of Altona. She was baptized up on the confession of her faith by Bishop Toews in the Sommerfeld Church.

Mom told us of a time when she was 30 years old, sitting on the swing wondering what life would hold for her. If she would ever marry and have children.  As the Lord sees and knows all, Mom met John Reimer from the 1-6 district and after a short courtship they married on May 18, 1952.  Most of their lives were spent in Altona and surrounding area.  They were blessed with eight children; Susie, John, Jake, Peter, Bill, Cornie, Mary and David.  Through the years as the children married, the family grew to 39 grandchildren, 83 great grandchildren, and one great great grandchild.

Dad and Mom enjoyed travelling whether it was in the local area or a longer distance. They enjoyed frequent visits to friends and family.  Mom and dad were married 40 years when dad went home to his Lord in 1992.

Mom enjoyed many things in life.  She loved to serve a meal or faspa for friends and family. Her cinnamon buns and apple pie were well known.  She enjoyed flowers, puzzling, and coffee with friends. But her greatest love was found in the Lord Jesus.

In 1998 Mom married Peter Reddekopp and our family grew again. We were blessed with nine step brothers and sisters; Isaac, John, Peter, Jake, Elizabeth, Mary, Cornelius, Ann and Abe plus their spouses and numerous grandchildren. Unfortunately this union was not to last long and dad Reddekopp went to be with his Saviour in 1999.

Mom’s journey in life was filled with joy and laughter, heartaches and tears, disappointment and victories.  Her strength came from a deep belief in her Lord. Her greatest desire was for the family to know the Lord and walk in his ways. She was our prayer warrior spending many hours praying and praising her Savior.  On her deathbed, she would point up to heaven and tell her grandchildren and great-grandchildren “That's where I want to see you”.  Mom peacefully went to sleep on April 28th and joyfully met her Savior.

Special thank you to the staff at Eastview Place and the nurses and doctors at the Altona Hospital. Thank you to Wiebe Funeral Home, and all the friends and family who express their condolences.

Funeral service on Tuesday, May 2, 2017 at 2:00 p.m. at the Altona Sommerfeld Mennonite Church, with burial at the Schoenthal Cemetery.

To order memorial trees or send flowers to the family in memory of Susanna Reimer - Reddekopp, please visit our flower store.