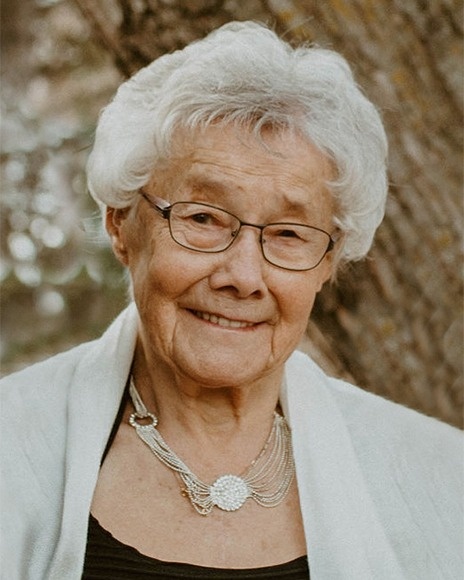 Peacefully, on October 1, 2022, our loving and sovereign Heavenly Father granted Mom’s desire and prayers and took her to His eternal home in heaven. She was 95 years old. Mom was born on July 5, 1927 to Herman A and Katharina Kehler (nee Wiebe) in Kronstahl village. She was the first of four girls.

She was baptized in 1948 at the Sommerfelder Church and has been a member of the Altona Bergthaler Mennonite Church for 74 years.

On November 6, 1949 at the EMMC in Eigenhof, she married Erdman Jacob Toews, or Eddy Boy as she liked to call him while they were dating. Their happy home was blessed with 5 children; Sylvia, Sharon, Steve, Stewart & Sandra whom they loved unconditionally.

While still single, Mom worked in a café in the Altona area, and at the kitchen in the General Hospital in Winnipeg, together with her sister Katharine. When first married, Mom worked as housekeeper and cook on a farm, where dad was the hired hand. However, most of her life’s work has been with the tasks of being a homemaker and mother, and later the best job in the world; helping look after the most amazing grandchildren! She always had a bountiful garden for fresh summer eating, and canned jars to feed her family all year long. The countless freshly baked buns, daily pies, and regular “yeetz kuchen” Fridays are fondly remembered by our family!

During their marriage, they moved a total of nine times, and lived in towns like Roblin and Winnipegosis before moving back to the Altona area in 1954.

She was predeceased by her parents, Herman & Katharina Kehler, her husband Ed Toews, daughter Sylvia Besson, and grand-daughter Alexandria Toews. She was also predeceased by two sisters, Katharine and Mary.

She enjoyed reading, puzzling, walking, gardening, and time spent with family. She was part of the Willing Helpers group at church, was involved with Stonecroft Ministries through the Rhineland After Five Club and Friendship Bible Coffee groups, as well as volunteering to babysit in the church nursery or other young mom’s groups. She also volunteered for hair care at the Ebenezer Care Home.

Mom was pleasant, caring, generous, kind and loving, but her most defining characteristic would be her faith in the Lord Jesus Christ, and He is the source of her salvation, strength, hope and joy, and she has lived out this faith in every aspect of her life, most notably her care, concern, and prayers for her family. It was her daily habit to read her Bible, and then pray for each family member by name. Our family has been very blessed to have a godly mom, grandma and great-grandma, and we thank and praise our awesome Heavenly Father, as these characteristics in her reflected His image.

Funeral service will be held on Tuesday, October 4, 2022 at 2:00 p.m. at the Altona Bergthaler Mennonite Church with burial at the Altona Cemetery.  Viewing will be at Wiebe Funeral Home Altona on Monday, October 3 from 1:00 - 9:00 p.m.

Donations in memory of Susan may be made to Back to the Bible.

To order memorial trees or send flowers to the family in memory of Susan Toews, please visit our flower store.