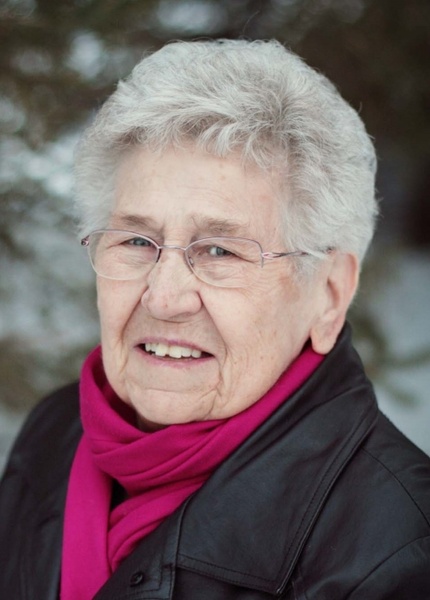 Susan Kehler (nee Wiebe) age 86 years of Altona, formerly of Rosenfeld, Manitoba passed away on Monday, October 1, 2018 at her residence.

She is survived by her children Wanda (Roger) Thiessen, Sharon (Cornelius) Goertzen, and Janet Kehler (Neal MacLanders), as well as her grandchildren, Kayla, Chelsey, Mark, Luke, Rebecca and Kyle and two siblings: Kay and Abe.  She was predeceased by her husband David F. Kehler, her parents, and her siblings: John, Jake, Henry, Helen, Cornie, and Dave.

Susan was born on June 5, 1932 on a small farm near Horndean, Manitoba.  She was the 6th child of 9 children born to Helen and Jacob Wiebe.

Growing up on the farm taught Susan a work ethic and gave her a strong sense of family.

Susan would often talk about the practical jokes, music and dances that were a part of life in the Wiebe household.

Susan was baptized when she was 19 years old.  Her faith and commitment to the Lord was always an important part of who she was.

The Wiebe family moved to Cartwright, Manitoba when she was 20 years old.

After a few years in Cartwright, Susan moved to Winnipeg where she worked for several years at a pharmacy, and later a jewelry store.

She met the love of her life, Dave Kehler, sometime later, and they were married on April 8, 1962.

Wanda was born in 1963, Sharon in 1965 and Janet in 1967. Being a mother was a role Susan was committed to, and this included teaching her children about God.

Once the girls were born, Susan worked at home until the Kehler family moved to Rosenfeld, Manitoba in the fall of 1971.

The move to Rosenfeld came about because Dave and Susan bought the general store there.  Dave’s General Store became a hub in the community with many “regulars” at the coffee table each morning.  Susan loved being part of the community, and this included volunteering with the Rosenfeld Ladies Auxiliary.

Dave and Susan sold the store in 1984 and Susan started work at the Altona Health Centre.  This again was a place where Susan found much joy in the relationships she established with those she worked with.

Over the following decade, Dave’s health made it increasingly difficult for Susan to manage work, the house as well as Dave’s care so, in 1996, and they sold their home and moved to Altona.   Although it was a difficult decision, the move to an apartment made life easier. Susan began volunteering with the local Ladies Auxiliary and Altona soon felt like home.

Susan retired from work at the hospital in 1997.  During retirement, Susan and Dave enjoyed lots of coffee and cards with friends and, of course, more time with family.

Dave passed away in 2001 after receiving much loving care from Susan.

Susan had a wonderful group of supportive friends who provided lots of laughs and care but her greatest joy was being with her family, especially her six grandchildren.

Susan passed away peacefully in her sleep on Oct 1, 2018.

She is now with Jesus and free from all worries and illness.

Funeral service will be held on Friday, October 5, 2018 at 2:00 p.m. at the Altona Sommerfeld Mennonite Church, with burial at the Rudnerweide Cemetery.  Viewing will be at Wiebe Funeral Home Altona on Thursday, October 4, 2018 from 1:00 p.m. to 9:00 p.m., and at the church prior to the service.

Donations in memory of Susan may be made to the Altona Health Care Auxiliary, Box 660, Altona, MB, R0G 0B0.

To order memorial trees or send flowers to the family in memory of Susan Kehler, please visit our flower store.