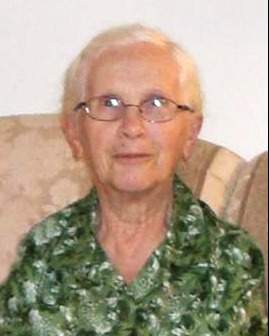 Sara was born on October 31, 1929 to Martin K and Sara (nee Wolfe) Klassen in the New Hope District.  She lived and worked on her parents’ farm in Altona and Austin.  When her parents retired and moved to Altona Sara found a job at the Garment Sewing Factory until her retirement.  She attended the New Hope School.

Sara accepted Jesus as her personal Lord and Saviour as a teenager was baptized upon the confession of her faith in the Eigenhof EMMC in 1949.  When her parents moved to Altona, the Altona EMMC became her church.

Sara enjoyed helping out with the food ministry in the church. Sara, together with Margaret, did a lot of visitation in the care home, hospital and homes where they knew about people who were lonely or needed encouragement.

She also enjoyed reading and faithfully read the Red River Echo and Recorder, among many other missionary letters and magazines.  Every week Sara would read through the flyers to find some good deals on groceries.

On Thanksgiving Day Sara & Margaret sat outside and enjoyed the beautiful warm sunshine.  She soon noticed her ankles were red and swollen and believed she had a sunburn.  But it became obvious it was more than that.  Things just became more difficult as weeks went by.  With Margaret’s help they were able to carry on until Monday when they both realized this could not go on like this anymore.  Sara was admitted to the hospital on Monday morning and she passed away on Wednesday, Nov 9th at 7 am.  We are so grateful Abe & June were able to spend the night with Sara.

She passed away peacefully at the Altona Hospital at the age of 93 years and 9 days.  She was predeceased by her parents, 2 sisters in infancy, 5 brothers and their spouses.

We are so thankful for the hospital staff, church family and Dolores who have shown much love, care and support during this time.

We look forward to meeting Sara when Jesus returns for His loved ones.

To order memorial trees or send flowers to the family in memory of Sara Klassen, please visit our flower store.