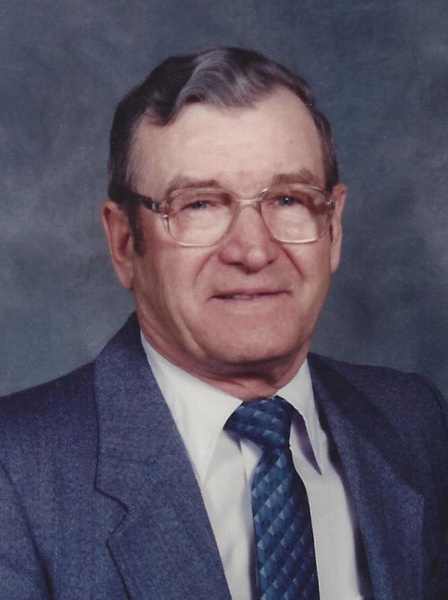 Roy (Reinhold) Pokrant was born on August 10, 1919 at Rosenfeld, Manitoba, the youngest in the family of Henry and Albertine Pokrant.

He grew up on the Pokrant homestead, north of Rosenfeld, farming alongside his father and brothers.  He was baptized in the St. John Lutheran Church of Rosenfeld, where he was a lifelong member.

In 1941 Roy was drafted into the Canadian Army during World War II, and he trained and served out of Vancouver until 1944.

When Roy came back home after the war, he was involved in the local Luther League, where he met many friends and played the drums in a band.  His love for music was evident even as a young man.  During this time, Roy met the love of his life, Elsie Kurbis from the Greenwald area.  Roy and Elsie married in 1949 and settled on a farm north of Rosenfeld, where they were blessed with 3 sons – Wayne, Rodney, and Barry.

As they farmed and raised their family, Roy was an active member of the St. John Lutheran Church.  He served on the church council as treasurer and on the property committee for many years.  Roy and Elsie had many friends, and they loved having company over for meals and playing cards.  They also enjoyed going to dances together.

After Elsie passed away in 1984, Roy continued to live on the farm until 1990, when he moved into his house in Rosenfeld.  He continued to help the boys on the farm well into his 80’s.  He kept busy by growing the best garden in Rosenfeld, and by meeting his friends at old time dances where they would polka and fox trot for hours.  He was an amazing dancer.

After many years living in Rosenfeld, Roy decided he was ready to move into the Ebenezer apartments in Altona.  He really enjoyed living there, visiting with the other residents and joking with the staff.  He loved having his family visit, and he was always up for a game of cards, which he usually won.

In 2013 Roy moved into the Eastview Personal Care Home.  He lived there until he passed away on September 27, 2017.

Roy is survived by his 3 sons and their families:  Wayne and Janet of Wabowden, Rod and Sandra of Altona, and Barry and Kim of Rosenfeld. His grandchildren: Pam (Jason), Tracy (Ty), Brad (Sam), Megan (Aren), Brittney and Matthew. His great-grandchildren Ethan, Gavin, Emma, and Jack.

He was predeceased by his parents, his 7 siblings, and by his beloved wife Elsie.

In lieu of flowers, donations may be made to the St. John Lutheran Church Memorial Fund.

To order memorial trees or send flowers to the family in memory of Roy Pokrant, please visit our flower store.