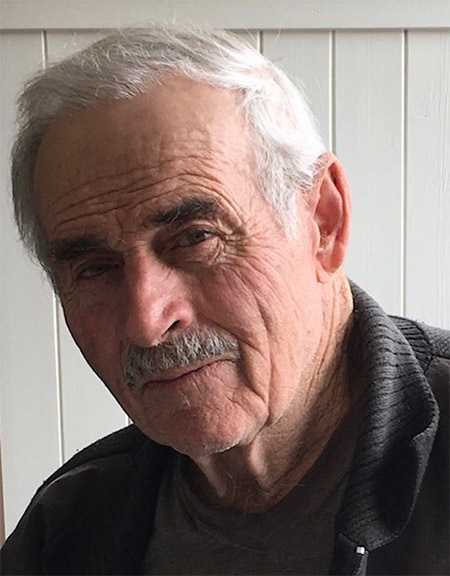 Peacefully, in his sleep on June 7, 2019, Roland Jubinville at 83 years of age, went to take his rightful place in the Kingdom.

Roland, also known as 'Ti-blanc' was the youngest born to Xavier Jubinville and Simone Maisonneuve of Letellier.  He was warmly welcomed by 10 older siblings on January 22, 1936 and forever became everyone’s little brother.

In the 40’s, there were dairy cows, slaughter hogs, turkeys, cereal crops and a large garden. The school aged children walked to school 3 miles and twice every Sunday. There was plenty of work and plenty of hands in those days.

But as Ti-Blanc and his side-kick Ti-Noir were chasing gophers between milkings, and flipping over outhouses, older sisters and brothers ventured out to make their own successes and establishing their roots elsewhere. The labour pool dwindled and Xavier phased out livestock.

Eventually only Roland was left to work with Xavier. Education was important and they ensured Ti-Blanc completed his grade 11 at Letellier school.  Afterwards, he went to Collège Otterburne and then attended the juniorat (Collège Mathieu) in Gravelbourg Sk.

He was a hard worker, ambitious, resourceful, inventive, mechanically adept.

For many years it was father and son growing crops. Equipped with a crawler, later a John Deere 3010 with a Case drill they put in buckwheat, flax, barley, canola, peas, wheat and entually sunflowers. The 1st combine was an 8’ Cockshutt.

In 1967, Madame Hubertine Payette of St. Lupicin made a personal call to Père Messier, to inquire about the character of this 30 year old bachelor. Would he welcome many children and be a good provider? Père Messier reassured her that Ti-blanc was from good root that produced straight solid stock.

Xavier and Simone were ready to retire to town, and on 9 November 1968, Roland married Noella Payette at Eglise Precieux Sang. While they courted, he likely embellished the farmer lifestyle, but his ‘53 Ford and greasy cap gave him away as a real farm boy. Mom said later, “He had no style at all, but he was good looking, funny and respected his mother. He liked his ketchup too.”

He was friendly, witty, even-tempered, charming.

Père Messier’s word held good: Roland and Noella soon opened their hearts to a boy and 2 girls. Life was busy but once again this home grew to include many foster children over the years. More layers of childhood memories mingled with those of the past. Dad was the ultimate provider. We were amply nourished in food and values. When crops failed or insurance rates rose, he didn’t burden us, but rather shared his stories, wit, wisdom, presence and assistance. Being generous, he gave his opinion too. He was always hopeful it would be better next year. He made do with what was at hand.

As much as he could, Dad repaired everything and purchased nothing brand new. It was best not to borrow, and he believed in good insurance for his crops. He pondered everything carefully and then acted decisively. He was a man of action and believed in doing something useful every day. Dad was never afraid of hard work, well into his 80’s.

We enjoyed road trips, camping, swimming and overnight visits. Between 4H and science fairs, grads, weddings, and moves, Dad was always there with a home built trailer and his strong back.

In 1998 Mom and Dad decided to build a custom retirement home on higher ground at St. Malo. Dad, never idle, built a workshop for his tractors and projects. Here he built trailers, restored cars, mowers, step-stools and junk.

These were truly golden years for them, and they found much joy in their family, church events, and simple pleasures. Grand-père was always willing to entertain grandchildren with scary masks and loud noises - sometimes he let them drive things too. He liked all this much better than travelling.

For many years, Dad returned often to this homestead. He said he felt rooted and grounded here.

After 12 years in St. Malo, easy transportation to doctors was deemed important for Mom and St. Adolphe became the place to gather family and have large meals. Dad puttered in his workshop there until Mom’s health failed and she passed away September 15, 2017.  Now a widower with too much space to manage, Dad returned to his beloved soil in Letellier.

For the last 2 years of his life, Ti-blanc trod familiar and beloved tree lines, paths and garden rows. He stood under the very trees planted by his grandfather Raymond and admired the same flat horizon to the west. He was proud of the life he lived, he said.

In lieu of flowers, donations may be made to the Alzheimer Society of Manitoba.

To order memorial trees or send flowers to the family in memory of Roland Jubinville, please visit our flower store.