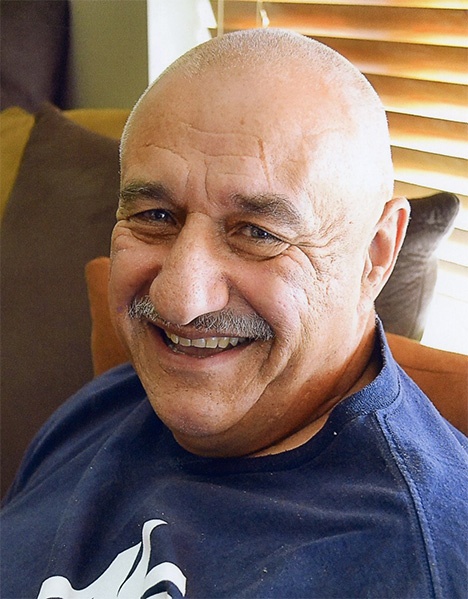 With his family at his side, Rick Friesen, husband, father, grand-father, and friend, 72, of Altona, passed away at Eastview Place in Altona, on Monday, August 9th at 5:21 pm.

Rick was pre-deceased by his parents, Diedrich & Helen Friesen, and one sister-in-law, Vickie Friesen.

Rick had always wanted to be a farmer, but that was not to be, so he worked at Friesens for a short time, then at the Chimo Building Centre, and 36 years at Blue Sky Opportunities.  Rick was the service manager there, and always enjoyed his job there.  Well, at least 98% of the time.  He always said when he didn’t want to get up anymore to go to work, then it was time to retire.  And that’s what he did, retired in January 2018.

One year dad’s friend, Hank Penner, asked Rick if he’d like to help out on their farm.  So Rick did this for many years.  He had to learn lots of new things, as farming had changed a lot since he helped his dad out on the fields.

The grandchildren were very, very important to dad.  He liked to take them for coffee.   Some of them were able to go on the H&M Farm combines with him.  Some of them he took to the school playgrounds, or to the Altona Aquatic Centre.  He made trips to the Fossil Discovery Centre in Morden with some of the grandchildren.  He was looking forward to another grandchild coming in September.

Rick was an avid baseball fan … a devoted NY Yankees fan, right to the end.   His room at Eastview was mostly covered with items that carried the Yankees logo.  Rick really enjoyed almost every sport, even curling, which mom thought was like watching paint dry.   In football, he was an Oakland Raiders fan, always saying the CFL just wasn’t really football.   And in hockey, it was the Toronto Maple Leafs.   I think the real reason Rick loved the Yankees was that most people don’t.  He wasn’t afraid to be different.  On a side note:  one time, by accident, mom cut dad’s hair down to nothing.  The clipper attachment fell off.  And once our neighbour Jolanda saw Rick, she told him that was so ugly.  After that he said he’d never grow his hair again.

Rick fulfilled a lifelong dream of a visit to NY stadium in 2008 with his son Nathan.   He made several sport trips to Minneapolis, and Toronto, with his other children to see different teams play.   These were all huge highlights for Rick.  I think only Dan missed out on a sport weekend with Rick.

Rick spent many years coaching his own boys in baseball.   Sometimes he was asked to take on boys that no one else wanted to coach.   He had a special way with boys and baseball.   He was on the South Central coaching team, when South Central won, and they were on their way to North Bay, ON for Nationals.

There was a time when Rick liked to golf, but because of such terrible shoulder pain, he had to give that up.   Next it was his knees.  There was soon nothing he could really do, or enjoy, without pain.

It was very important to Rick that his sons treated, especially women, in a respectful manner.

In 2017, Rick had the opportunity of a lifetime.  Nathan had enough points to fly them both to Nairobi, Kenya.   They were gone for 4 weeks, and Rick got to see and live things, that he’d always only imagined.  He also got to meet Stephannie, who is now our daughter.

When the children were young, Rick devoted many hours to working with the boys club at the Altona Bergthaler Mennonite Church.

A short while, before retirement, Rick added another hobby to his life.  One that didn’t involve using painful shoulders and knees.   Coffee at Subway.  During the week he usually went for 6 am, as he couldn’t sleep anyway.  And every couple of months he added another time for coffee.  Early at 6, then at 9:30, 2:30 and in the evening.  He had a good set of friends that he met there on almost a daily basis.

Then on March 30th, 2019, our lives were changed forever.  Rick had a massive stroke, and he was never again the Rick, or dad, that we had known before.  He was in Boundary Trails Health Centre from March 2019 to January 2020.   Then in January of 2020 he was transferred to the Emerson Personal Care Home.  This is a small care home, only 23-24 residents, and lots of one-on-one, and lots of fun and laughter.  Then in September 2020, a room opened up for Rick at Eastview Place in Altona.  And he chose to come back home, which is where he stayed until his passing on Monday, August 9th.  He made many new friends/acquaintances throughout his medical journey.   We would like to thank the staff at all three medical facilities for the loving care they gave Rick.

Donations in memory of Rick may be made to Blue Sky Opportunities, or to the Heart and Stroke Foundation.

To order memorial trees or send flowers to the family in memory of Rick Friesen, please visit our flower store.