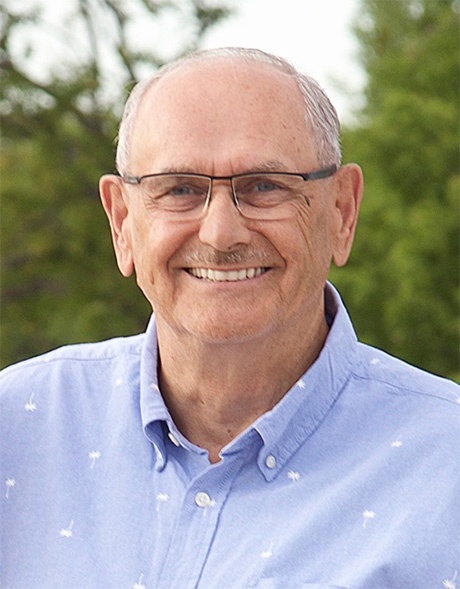 Peacefully on Monday December 2, 2019 at the Altona Memorial Health Care Centre, Ray Giesbrecht 73 years of age of Altona won eternal life by the grace of God through his persistent and relentless faith in his Lord and Saviour Jesus Christ. He fought the good fight and finished his journey, and will now receive his reward in heaven.

Dad was born in the Altona hospital on Thursday, May 16, 1946 to Bernhard & Anna Giesbrecht, he was the youngest of six children. Dad accepted Christ into his heart in the summer of 1957 at the George Brunk tent revival, and was baptized upon confession of his faith on June 6, 1971 in the Altona E.M.M church by Bishop Jacob H. Friesen.

Dad was part of the Alt-Bergthal school district, his favourite activities as a child were exploring the bushes close by and spending time by the creekbank, in winter they skated and played hockey on the infamous Buffalo Creek, and in summer they used it as their swimming hole, and added their own source of entertainment by building rafts and a diving board. Dad was 14 when he bought his first bike, and together with his friends they would venture off to Altona to buy ice cream floats, and play mini golf.

On May 24,1970 Dad went on a date with Helen Wiebe. When asked of his first thoughts of this young lady, Dad said “sometimes there are just no words, he was surprised that this beauty had not already been taken, and were united in marriage on Sunday, July 18,1971 with John Bergman officiating. They spent the next 3 years travelling and enjoying each other.

In 1974 They welcomed their first daughter Andrea, she gave these rookie parents a run for their money, as she was 100% colic! This did not deter them from having more children.

Dad purchased a piece of land in the Altona Village and here built a house using the barn wood from a barn that he and his brother-in-law Jake Wiebe tore down. In October of 1976 they moved into their new home and two short months later they welcomed their second daughter Melissa.

In 1980 their 3rd daughter Melanie arrived and in 1982 they were blessed with their 4th daughter Allison.

Dad was a family man and he loved spending time making memories that will last a lifetime. Some of the fondest memories are the annual trips made to Valley Fair, camping trips, spring break in Minot, and our first trip to Disney World. Making Igloos in the winter, random country gallivants where he shared interesting facts only he would know and many a car ride to ball games.

He started serving on the church board in 1980, and in 1990 Dad and Mom were called to serve the Altona EMM Church as deacons, it was a calling that would influence the rest of his life. In 1993 our mom was diagnosed with Breast Cancer, dad loved and supported her and was by her side unconditionally, she was called home on June 23, 1999. Dad supported us girls and did the absolute to console us as we started a new chapter without our mom.

In this new chapter, us girls grew up and life started to change as the family expanded and dad gained three sons which he was honoured to have and welcomed them in as his own. He was blessed with 9 grandkids whom he cherished, and made a huge effort to have a relationship with each one of them. Some of the momentous things he did with his grandkids were: skating on the Buffalo Creek, watching countless ball games, attending their music concerts and at the age of 70, he was still taking grandkids on their first rollercoaster rides. In February of this year he surprised us all with a 17 day vacation to Florida. These special memories are part of his legacy he left us with…spending time together and sharing his love.

In 2001 dad met Helen Heinrichs, this started another new chapter in his life. In 2002 they were married and dad welcomed Dwain and Cindy, Mike and Kari, Trish and 6 new grand kids into the family. We would like to thank the Heinrichs family for the support that you have given us at this time, our Dad loved each one of you. Dad was elected by the Church to serve as a Lay Minister in 2001 and continued until 2016. Dad and Helen spent most of their time with visitations at the hospital, visiting shut-ins, and hosting people for coffee or sitting around the fire and connecting with people in the community.

Dad and Helen had many friends and enjoyed multiple trips with them, some locations they visited were, Texas, Branson, Florida, Cuba and New Zealand.

Dad has made many connections and lifelong friendships throughout his working career. In 1965 he started at the Rhineland Consumers Co-op, here he pumped gas and sold parts. From 1967 - 1978 he was employed at D.W. Friesen’s. The next 14 years were spent at Chimo, later known as Altona Building Centre. Here he sold flooring and cabinets. Manitoba Housing would be his final place of employment where he worked as Maintenance Coordinator from 1993 till his retirement in 2016.

In March of 2018 Dad’s life would quickly change with the passing of his 2nd wife Helen, and again he had to start a new chapter. Dad spent most of his time attending ball games, going to the coffee shop, and spending time on his yard.

Dad’s house and back yard were always open to whoever passed by, and for those who stopped in Dad always had an entertaining story, and shared his funny sense of humour. Dad took a fondness to fine details, like the moon, he knew every single phase of the moon and learned it all by observation. He even stated he'd like to be buried by moon light, but then chuckled and said “I guess I won’t have the last word.”

Dad loved listening to music and when you walked past his place in summer he had old country music playing and during the Christmas season you could hear the chimes of the carols. Our dad LOVED Christmas, he said everybody needs Christmas. The lights he so diligently set up on his house and on the yard were his gift to the community, to be able to show the real reason for the season, that Jesus is the Light of the world.

On May 31, 2019 Dad was diagnosed with the dreaded disease of Acute Myeloid Leukemia, and in his words he was given a death sentence but faced it with a good attitude and his faith never wavered. He was disappointed that he would be unable to enjoy a few more years of retirement and spend more time with the people he loved. Dad endured six rounds of chemo, these treatments intern made him weak. These last few months he graciously let us come into his home and take care of him and his household, as making meals for himself became a struggle.  It was a blessing for us to be able to do this for him. On Wednesday, November 27th dad’s specialist informed us the chemo wasn't working but he could try one more type of treatment which would give him a few more weeks, dad sat and thought about it and said yes. The next day he received this new treatment and to no avail, it did not work. The specialist called again on the 29th to give us the sad news that he may have only days left. That evening his kids and grandkids got to spend quality time with him and turned on his Christmas lights for the season. Later that evening he turned very ill and was admitted into palliative care the next morning. He was able to say good-bye to many of his close friends and family, and on December 2nd was surrounded by his 4 daughters and their families when he took his first steps into heaven.

Our family wishes to express their heart felt thanks to Dr. Rimmer, Dr. Brown, Boundary Trails Cancer Care staff, Dr. Winning & the staff at the Altona Hospital, Pastor David Friesen, the food committee and for all of you that have given prayers & encouragement by sending flowers, dropping off food, visits & phone calls. We would also like to give our gratitude to Pastor Al & Anita Kehler, and Trevor from Wiebe’s Funeral Home for your guidance and care at this time.

A celebration of Ray's life was held on Saturday, December 7, 2019 at 2:00 p.m. at the Altona EMM Church, with burial at the Altona Cemetery.

Donations in memory of Ray may be made to Altona and District Palliative Care.

To order memorial trees or send flowers to the family in memory of Ray Giesbrecht, please visit our flower store.