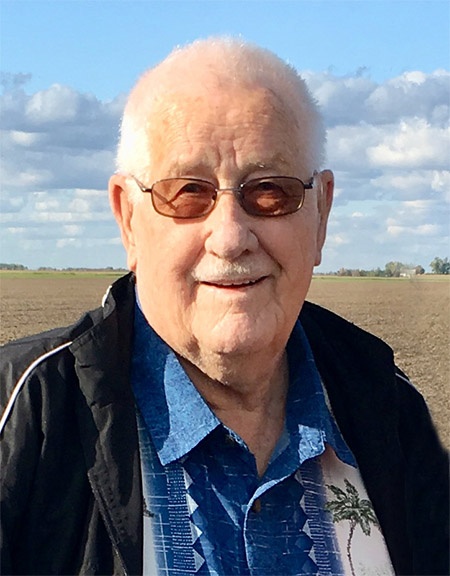 Peter Wiebe of Altona passed away peacefully with Mom and family by his bedside on October 13, 2019 at 2:00 p.m., as a result of a massive heart attack.

Peter was born on June 5, 1932 at Neuhoffnung, Manitoba to his parents, Henry & Sara Wiebe. Not only was Peter born that day, but also his identical twin Cornie.

In May of 1952, Dad accepted the Lord as His Savior and got baptized in June of 1952 in the Bergfeld Church. On July 20, 1952, Dad and Mom were married in the Eigenhof Church. Their first home was at New Hope. After they were married, Dad worked in Rudnerweide for Henry Loeppky on the farm and then moved on to the Jim McClaren Farm at Roland where he was a farm hand. He enjoyed farming and decided to try it on their own. Mom and Dad moved to Roseau River where they bought a farm. During this time, Dad also drove cream truck for Frank Nickel, drove transfer truck for Ridgeville and Gardenton transfers, and was a school bus driver for Boundary School Division. After this, Dad and Mom moved to Vita, where Dad began driving for Grey Goose Bus Lines, driving a return trip from Vita to Winnipeg every day. After 4 years, Dad got transferred to the Gretna bus run. Dad later did Maintenance at the Gretna Units and then drove the school bus for Rhineland School Division. He also kept busy with painting, garbage pick-up in Gretna, and working for Manitoba Housing. Dad went back to driving the school van for the MCI until the age of 65. Dad didn’t retire completely at this point but rather took part-time jobs at the beet piler in fall and drove for the Handi-van for 7 years until the age of 72 when Dad had his first stroke.

Dad enjoyed volunteering at church through ushering and being a board member. He was also on the board for the Roseau River Bible Camp and volunteered at the local MCC shop.

After numerous mini strokes, he also struggled with Diabetes and heart issues. In the winter of this year, Dad began having severe problems with his heart and was diagnosed with Congestive Heart Failure. He spent 2 weeks in March at St. Boniface Hospital to address his heart issues. After that, according to his doctor, he was doing amazingly well at his age. Despite his health issues, Dad still always enjoyed going out with Mom and their friends for coffee. In fact, they had coffee with their friends just the day before he passed away. On Sunday, October 13th, Dad had dizzy spells which was quite common in the mornings. However, this time it was different. Dad fell and couldn’t get up on his own and was complaining of his hip. Dad was taken to the Altona Hospital by Ambulance. We thought he had a broken hip but after the doctor’s assessment, found out that the bigger problem was his heart. After a few hours, Dad was unresponsive and had suffered a massive heart attack. Dad only lived 2 more hours.

Funeral service was held on Friday, October 18, 2019 at 2:00 p.m. at the Altona Sommerfeld Mennonite Church with burial at the Altona Cemetery.

Donations in memory of Peter may be made to Roseau River Bible Camp.

To order memorial trees or send flowers to the family in memory of Peter Wiebe, please visit our flower store.