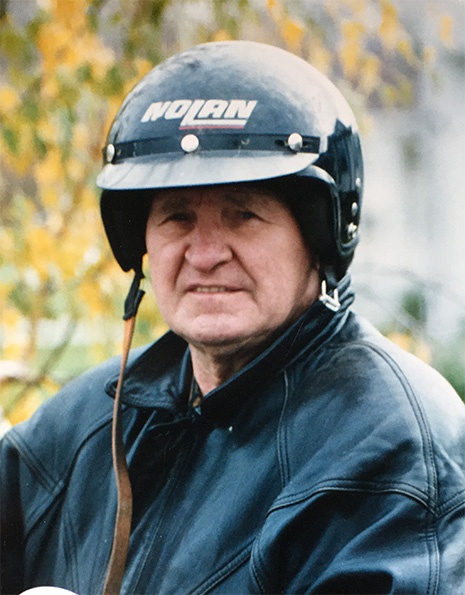 Peter was born in Eigenhof, MB. To Peter and Anna Toews on June 1, 1925. The hand of God seemed to be on Peter even at a young age. He relates his story of falling into a pond and not knowing how to swim but he heard a voice instructing him to sink to the bottom and then walk out. Which he did. Peter also related a story as a teenager of walking in a field and seeing an angel near the tractor. Closer investigation resulted in asking Jesus into his heart and the angel confirmed to him he was now saved.

Peter got his limited education in Eigenhof yet managed to excel in the work force through hard work and his ingenuity. His first jobs were as a farmhand where he worked long hours for little pay. Often his pay check got subsidizes with grocery vouchers instead of full pay checks. Somewhere around this time Peter met a beautiful Zacharias girl named Eva who had a mop of curls on her head almost equal to his. Peter says Eva kept looking at him and saying hi and he was a little slow realizing she was interested in him so with the extra nudging of his brother he finally got the courage to ask her out. Peter always claimed it was Eva who asked him to marry her and on October 28th, 1945 they pledged their love to each other and this year they were able to celebrate their 75th wedding anniversary together. Out of the mix they had 9 children. Dad always said he had no favorites but we all knew there was one little girl that had him wrapped around her little finger.

They made their first home in Eigenhof and even lived with Peter's parents for some time. Then there was moves to Piney, Morris. Altona, Niverville until they moved to a more permanent residence in Schoenthal. When Peter's parents move to town with their house included he was able to purchase their 13 acres, basement included. So we actually lived underground for the first year. Again Peter's ingenuity surfaced as he made a furnace out of a 45 gal. drum. This was downright scary to most of us but miraculously nobody got burned. The next year whoever could swing a hammer got educated in the construction business. The sons did all end up in some measure of the construction business and were able to build a quality home with new lumber for Dad and Mom when they eventually moved back to town. The farm was Peter's training ground for his children. He found more work projects that most anyone could imagine. He spent many hours under his car in the garage tinkering on the motor and we would try and sneak out of the house lest we become his mechanic's assistant for the next 2 hr. Peter was not lazy and anyone living in close quarters with him was not allowed laziness. We had all learned to hoe beets at an early age and that became an ongoing summer project from early morning before school to a quick snack after four then to the field till darkness closed in on us.

Some of the other professions Peter worked at were mechanic, Watkins Salesman, labourer at Kehler Feed Service and many years as a labourer for Derksen and Fonger Construction and finally as a welder at Conquest Manufacturing where he retired at age of 70 and somewhere in this stretch of time he got into the strong delusion that silicone could fix anything.

Peter also loved his vehicles but nothing compared to his 36 ford that could accomplish amazing feats and his Toyota that almost equalled perfection according to one nephew. His last vehicle was a Dodge Caravan needed for more practical use because it had to double as a handy van for Connie.  Again with a little ingenuity he welded some folding ramps together that served the purpose for years and Dad, Mom and Connie could all  gallivanting around together. Oh yes, at the ripe age of 65 Peter decided to get his motorcycle licence. I think we were all proud of him for that. He did have one accident but escaped with a broken wrist and sore shoulder. He so enjoyed his bike trips esp. with his brothers and brother-in-law. As he got older and more forgetful he needed to give up the keys to his van. He was pretty sad about it for some time but soon purchased a scooter that could drive at a pretty good clip. He took many a trip first to the hospital, then to Eastview to visit Eva his beloved. Apart from covid restrictions his own health issues at times and super bad weather he was a faithful stand-by for her. Sometimes they didn't say much but she was always comforted by his presence.

Peter seldom met a stranger. He talk almost anyone's ear off. On a trip to Edmonton for his brother’s wedding they made a pit stop and everyone was back in the car but Dad wasn't showing up. Finally they went to look for him and found him in the garage having a lengthy conversation with the mechanic. His coffee buddies at Chicken chef will miss his stories. His grandchildren will miss his stories and even those of us who heard them dozens of times will miss his stories.

Health issues started taking a toll on Peter's life. He was on a nitrogen patch for many years. On August 29th 2020 he suffered a mild heart attack then on September 29th a fall but both times he was able to regain his mobility enough to continue to visit Eva. It was almost like his protector instinct were strong enough to keep himself going till she no longer needed him. Even in the midst of all this he kept saying he was the healthiest man alive. When Eva passed away on December 1st we sensed his zeal for life diminished and he mostly slept even when we came for visits. On December 24th he was admitted to Altona Memorial Health Centre and in the early evening on the 25th of December 2020 Peter passed away.

Some of us will remember his tough discipline in our youth. Some will remember how he was there for us when we had financial struggles. Some will remember his anger some will remember the fun when he played baseball with us and took us to motorcycle hill climbs. Some will remember his demands to perform others will remember his hard work to provide for us. Some will feel emotional distance from him, other will connect with his big hugs and frequent expressions of “I love you”. Each one gets to choose what they will focus on. I pray you all choose the good things in the end. We are so grateful for all the family members help with his finances, cleaning, fixing things, taking him out for coffee and meals, the many Doctor appointments, selling things, shopping groceries and clothing just even keeping a watchful eye on him when he needed it. For the help in the times he had to be moved in recent years and moving out the last of his things in his apartment. Thank you everyone for working so well together as a family.

Thank you to all the amazing home care home care workers, the directors, caring staff at the Manor, kitchen staff, and housekeeping that so contributed to his daily life. We own you all a debt of gratitude. They say it takes a village to raise a child but it apparently also takes a village to take care of the elderly. We also want to extend our thanks to the Doctors and nurses that attended to his ongoing needs and ambulance drivers that were all part of his care. We also extend our thanks to Trevor and Wiebe Funeral Home for their gracious services.

Peter you were deeply loved and will be greatly missed

God has a better home for you.

A private funeral service was held at the Altona Cemetery.

To order memorial trees or send flowers to the family in memory of Peter H. Toews, please visit our flower store.