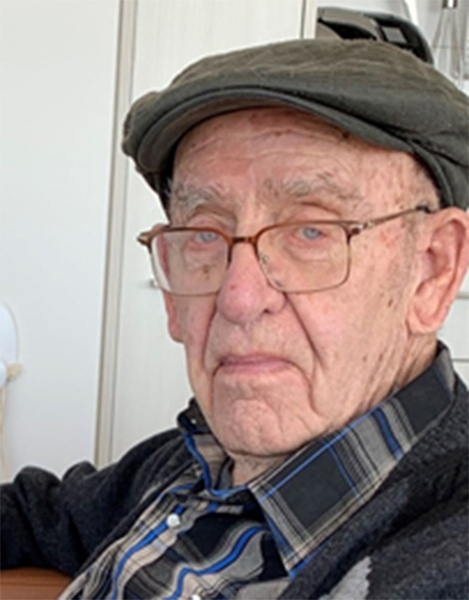 Our dad, Peter (“Pete”) Kroeker was born in Plum Coulee on May 4, 1926 and left us for his eternal home on Friday, August 21, after a brief stay in hospital.

Dad was predeceased by our mom, Mary (Driedger) Kroeker, their daughter Frieda Lorraine, and dad’s sister Justina Friesen. He is survived by his children Beverley (Enrique) and son Richard (Karla); grandchildren and great-grandchildren in Calgary, Vancouver, and Mexico City; siblings Mary, Elizabeth, Kay, and Dave and their families; and his special friend, Ruth Klippenstein.

Pete grew up on farms near Plum Coulee, Bergfeld, and Gretna. He learned carpentry and masonry from his dad, Peter P. Kroeker; kindness, compassion and generosity from his mother, Justina (Zacharias) Kroeker.

Pete and Mary married on March 9, 1948. They moved to Winnipeg shortly after the birth of Beverley in 1952, and Richard was born in 1955. Over the years, they made several major moves: St. Catharines, Victoria, and Calgary; then full circle back to southern Manitoba, making their homes in Rosenfeld and Gretna. Pete moved to Altona after Mary’s passing.

In Winnipeg, dad worked for many years for the Winnipeg Grain Exchange; in Ontario and BC he worked building houses and installing cabinets, finally retiring after moving to Calgary. Dad’s work ethic was unparalleled—an example to all of us.

Dad’s unwavering faith was the cornerstone of his existence—the rock upon which he and mom built their home and raised their family. Dad loved to praise the Lord in song, and we joyfully remember the many occasions on which he pulled out his guitar and harmonica and mom her accordion, and they sang beloved hymns as well as classic Bluegrass, often along with uncles, aunts, and cousins.

Mom died in 2006, at the end of a three-month-long visit to Beverley and Enrique in Mexico City. Dad’s loneliness was heartbreaking, and we were thrilled when he forged a special friendship with Ruth and they provided such great companionship for each other.

Eventually, dad believed he should think ahead to a time when he might need the help of family, and he moved to Calgary in 2016 to live near to Beverley and Rick. His first home here was in Aspen Lodge, and earlier this year he stayed with Beverley and Enrique for some time before moving to Beaverdam Lodge.

Dad was taken to hospital after a serious fall on Tuesday, August 18, where he was cared for until he died peacefully three days later.

A graveside service will be held for dad at the Eigenhof Cemetery on Friday, September 4 at 2 p.m. As we are somewhat limited in numbers because of COVID-19, we will appreciate you letting us know on the Tribute Wall of this obituary if you would like to attend; or by calling Beverley at 587-439-8529. We would not wish to exclude anyone who would like to pay their final respects to our dad.

Donations to the Alzheimer Society are gratefully accepted in lieu of flowers.

To order memorial trees or send flowers to the family in memory of Peter Kroeker, please visit our flower store.