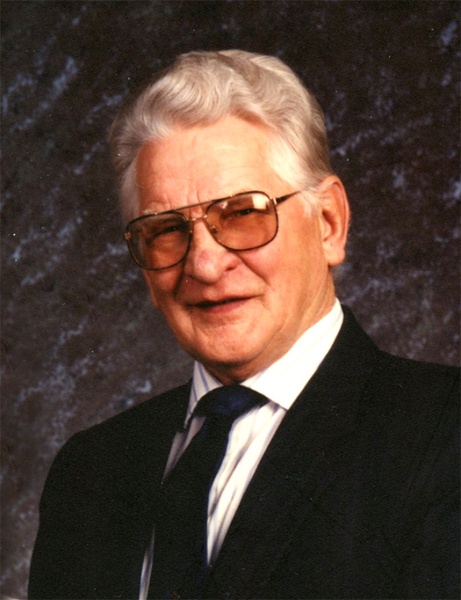 It is with great sadness that we announce the peaceful passing of our beloved father, grandfather and great-grandfather Peter J. Bueckert.

He was predeceased by his wife Eva, two children in infancy, Ernest and Kathrine, son-in-law Bryan Eidse, and daughter-in-law Colleen Bueckert (nee Nickel).

Peter was born on February 16, 1918 in Arkadak, Russia to Johann and Katharina Bueckert. In 1925 the family left Russia to make a new home in Canada in the village of Schoenwiese, MB. In 1939 Peter was baptized by his father Johann P. Bueckert, Elder of the Blumenorter Mennonite Church. That same year Peter registered at the Elim Bible School in Altona where he met the love of his life, Eva Klassen. They were married on September 27, 1941. The call came for Peter to go to Kapuskasing, ON for alternate service during the Second World War. Upon his return Peter, Eva and their son Aldon moved to Winnipeg where their second child Vera was born. Peter spent the remaining years of the Second World War working as a conscientious objector. In 1947 Peter and his family moved to Gretna, MB where Peter worked as a mechanic for his brother John. Peter and Eva then had two more children, Lynn and Eric, as well as two children Ernest and Kathrine that sadly died in infancy. In 1958 Peter purchased his own business, Bueckert's Motor Service, automotive repair business. Peter became a Chrysler Dodge dealer in 1963 and remained a proud Chrysler dealer until his retirement in 1985. Peter was active in his community as a Sunday School teacher, community band member, serving on the local school and Credit Union boards and was a member of the Gretna Curling Club. After his retirement Peter became an avid golfer. Peter and Eva enjoyed serving the Blumenorter Mennonite Church for many years as Church Deacons. Peter enjoyed his retirement years travelling with Eva, gardening, golfing, and spending quality time with his family.

By 2014 Peter's health dictated a move to Deer Lodge Centre where he remained until his passing on January 2, 2016. Dad's strong faith, cheerful personality, positive and eternally optimistic attitude has been an inspiration to his entire family. The family thanks Dr. Belcha and Dr. Mink as well as the nurses and staff of the 4 East ward at Deer Lodge Centre for the excellent care he received in all aspects during his time there as a resident and a special thanks to Dad's caregiver Etalemahu Alemu, for her constant and kind care.

The Funeral Service for Peter J. Bueckert will be held on Friday, January 8, 2016 at 2:00 p.m. in the Blumenorter Mennonite Church in Rosetown, MB. Viewing at the church prior to the service.  In lieu of flowers, donations may be made to the MCC or the Movement Centre of Manitoba.

To order memorial trees or send flowers to the family in memory of Peter Bueckert, please visit our flower store.