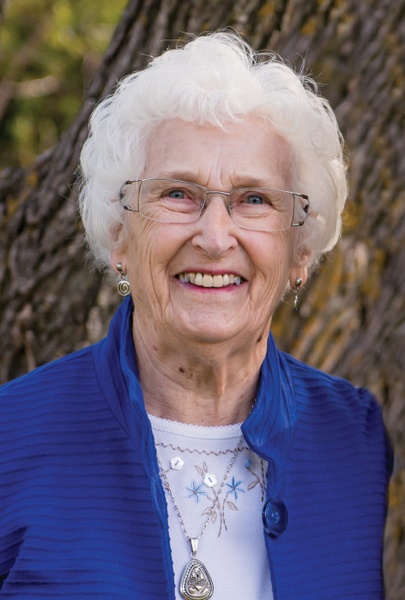 With her beloved husband Victor at her side Olly died at the Altona Hospital on May 29, 2015.

Olly was predeceased by her parents, David and Anna Wiebe and brothers John, David and Henry.

Olly was born in McAuley, Manitoba near the Manitoba-Saskatchewan border and moved to Gardenton, Manitoba as a child. She attended Purple Bank School in Gardenton until grade 11. She took her grade 11 at the Mennonite Collegiate Institute in Gretna and grade 12 in Morris, Manitoba after the family relocated there.

Olly completed Normal School in 1947-48 and took her first teaching job at Kenneth School District near Roseisle, Manitoba. After one year she accepted a teaching position in Winkler, Manitoba where she taught until 1950 when she married Vic, a fellow teacher.

Vic and Olly, with their first child, moved to Altona in 1951 where Vic changed careers and became the editor of the local newspaper and Olly focused on raising their two boys.

In the early 60’s Olly accepted a job in radio, becoming “Aunt Olly” to hundreds of children and adults all over Manitoba. She became the familiar voice of “Children’s Party” and the “Ladies First” program on CFAM. Her radio career would last 27 years before she retired in 1987. She was actively involved in community organizations, wrote a weekly column for the newspaper, published a cookbook and taught Sunday School.

For Olly, family was everything and she beautifully reflected God’s love on her husband, children, grandchildren and great grandchildren through her words, deeds and warm embrace.

We are profoundly grateful for her life and saddened to have lost her. Her example of unwavering faith in the face of life’s challenges is what we as a family aspire to.

The family wishes to thank her wonderful church family at The Altona Mennonite Church for their love, prayers and support over the years. Thank you to Dr. Dieter Buddefeld for his caring attention to detail in seeing to Olly’s medical needs and his compassion in treating her. A big thanks to the staff in the Cancer Care unit in Boundary Trails Hospital and the staff of the Altona Hospital...God bless you all.

In lieu of flowers, memorial donations may be made to Mennonite Central Committee (MCC), or to CancerCare Manitoba.

To order memorial trees or send flowers to the family in memory of Olga "Olly" Penner, please visit our flower store.