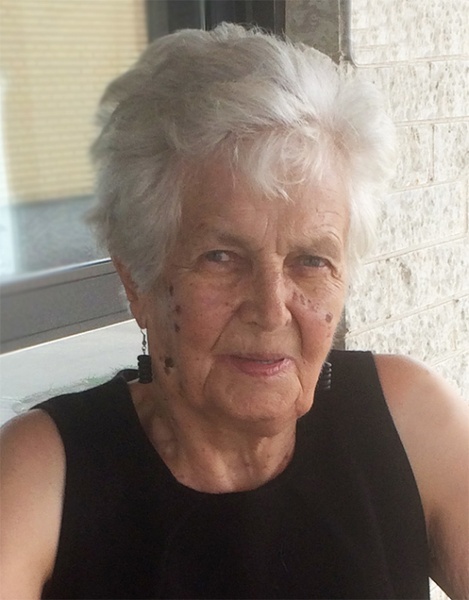 After a brief period of illness, Norma Anne Giesbrecht passed away peacefully on June 19, 2018 at the Health Sciences Centre in Winnipeg, Manitoba with her husband John at her side, holding her hand.  She is dearly missed by her husband, John Giesbrecht, her children Harold (Brenda), Pauline (Paul), Henry (Kathy), Marjory (Warren), daughter in law Colleen, 12 Grandchildren, and 5 Great Grandchildren.  She is predeceased by her first husband, Johnny Derksen, her three older brothers, one sister, as well as her son Larry Derksen.

Norma was born and raised in Neubergthal, Manitoba.  She was the youngest of five children, the “bonus” as her father called her. She was married to Johnny Derksen on July 23, 1955.  Together they raised their family of 5 children in Langevin, Manitoba.  Her husband died accidentally in 1974.  Her son Larry also passed away accidentally in 2001.  Through those tragedies and ups and downs, she showed strength, gracefully overcoming these challenges to provide a home for her children.  In 1975, she moved her family into Altona.

On November 26, 1983 she married John Giesbrecht.  They maintained their home in Altona until her passing.    Together they enjoyed travelling in Canada, the United States and abroad.  They explored their own province, driving hundreds of miles through the Manitoba countryside, admiring the grain fields.  Grandma referred to herself during these times as “Driving Miss Daisy”.

One of her greatest joys was travelling across Canada to see her children, grandchildren, and great grandchildren and the homes that they have made.  Together Norma and John enjoyed helping others, spending time volunteering at different organizations like the Ebenezer Home, the Neubergthal Heritage Foundation, and the Mennonite Disaster Service to name a few.  Through her busy life she and John continued to be active and supportive members of the church.

As a snapshot into Norma’s life, she had a great love of gardening, she curled in the women’s league well into her 70s, she was an avid reader, and like her mother before her, she journaled every day.  Her last journal entry was June 4, 2018.  She had a love of Webster’s dictionary and would pull it out at any time to discuss the true meanings of the words that we use.  The coffee pot was always on at her house and there was always room for one more at her table.

Norma was a warm, caring, generous women with the gift of wit and subtle sarcasm.  She was a great listener, and she would provide you with her opinion when she thought it was appropriate.  This could be with a short statement, and sometimes just a look…or a few blinks.  Regardless of the challenges she faced, she looked to God to carry her through.

The family thanks you for all of the support through this time.  Through it all, it was a life well lived.

Memorial service was held on Saturday, June 23, 2018 at the Altona Sommerfeld Mennonite Church.  Interment took place at the Neubergthal Cemetery.

To order memorial trees or send flowers to the family in memory of Norma Derksen Giesbrecht, please visit our flower store.