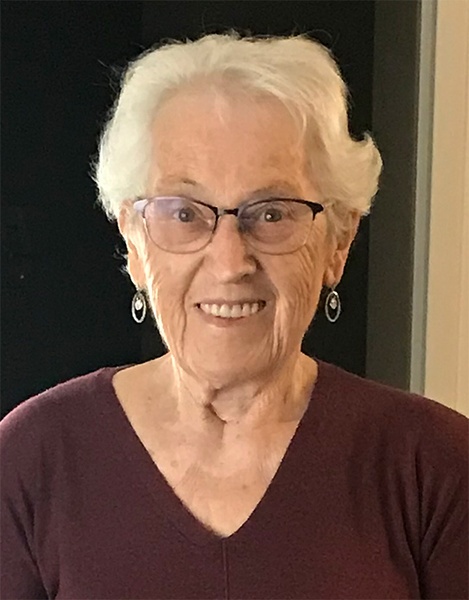 Nora Hildebrant nee Friesen, 85 of Altona, Manitoba, passed away peacefully on October 18, 2021after a fast, yet courageous battle with cancer.

Nora was born July 20, 1936, to Susan and Abram Friesen. Sadly, her father Abram passed away when Nora was only 4. It was not long afterwards that her mother was remarried to Cornelius Klippenstein, who Nora always considered to be her dad. Nora and her older sister Helen gained 5 new siblings: Lawrence, Allie, Ray, Alvin and Bill. From this union came baby sister Dolores.

Nora was baptized upon her faith in June 1956 and in August 1956 she married David Dueck. David passed away suddenly in 1975 leaving the farm and three children to care for. But resilience was at Nora’s core. She was knocked down, but knew she had to get back up again. When asked how, she simply shrugged her shoulders, and said, “Oh you know. What else was I going to do?” With grace and all the humility, Nora credited those that helped her along the way. Nora completed the sale of the farm and moved into a home in Altona and started working first at the Co-Op and then at Miller as a custodian. Not long after, in 1977, she started working at HiWay Inn until 1999 when she retired after 22 years.

In 1980, Nora met Menno John Hildebrant. John and Nora were married Feb 14, 1981. With this union came Wendy, Darlene, Pearl, Sharon, Leonard, Lorna and Sylvia. Together John and Nora made it a practice to escape the cold by travelling to Acapulco, Mazatlán, Puerto Vallarta, Oahu and Maui to name a few. John passed away in 2007. Once again, Nora was left to pick up the pieces and start over. She loved adventure and on her own she took bus tours to Nashville, Newfoundland, Saskatoon, travelled to Palm Springs both by air and car and took a number of trips to Vancouver and Calgary to visit children and grandchildren.

Through the years Nora loved watching her sons play hockey and later she would be there cheering on her grandchildren and great-grandchildren as they played baseball and hockey. Nora loved Chinese food and enjoyed scrolling through Instagram, leaving the odd comment. Nora also volunteered at MCC for many years, was a member of the AB church serving group, and served on many other groups in the church and community throughout the years.

Nora had never been sick in her 85 years; the odd aches and pains, but some illnesses have a way of sneaking up on a person. Nora was diagnosed with cancer in June 2021, she was hospitalized on Sept 20 and passed away peacefully on October 18, 2021. Mom was a quiet, faithful woman to the very end. She will be dearly missed by her family and many friends.

Funeral service was held on October 22, 2021 at the Altona Bergthaler Mennonite Church. Interment followed at the Altona Cemetery.

Donations in memory of Nora may be made to MCC, Altona and District Palliative Care, or to the Altona Bergthaler Mennonite Church (Serving Group).

To order memorial trees or send flowers to the family in memory of Nora Hildebrant, please visit our flower store.