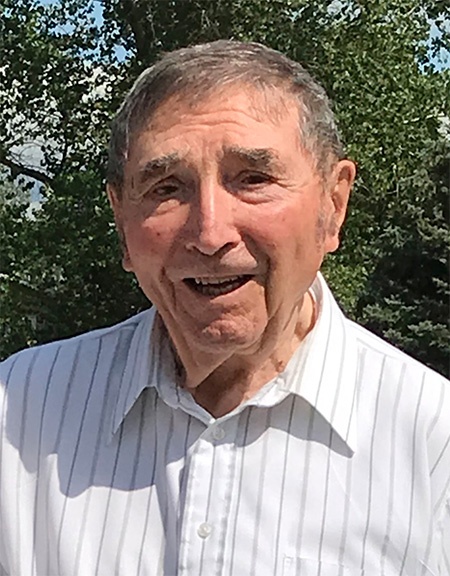 Michael was born May 3, 1931 in McCreary, Manitoba to immigrants John and Katie Tarnick from Romania, and was baptised in the Roman Catholic Church as an infant. He grew up in McCreary until the age of 21 when he moved to Winnipeg, Manitoba where he worked for the Hudson Bay Company.

Michael met his wife Jean at the YWCA dance. Michael and Jean dated for a few months before getting engaged in August of 1954. They were later married on June 18, 1955. Being an only child, the Irwin family took Michael under their wings and introduced him to fishing, hunting, camping, endless dances, and the many family shenanigans that took place when they had get-togethers.

Michael began working at the Bank of Montreal in 1956 and was there for 22 years. The Bank of Montreal took them from Winnipeg to Regina, and then to Maple Creek, Saskatchewan, where they welcomed their first born son Patrick Johnathan on September 30, 1961.

Shortly after that, The Bank of Montreal then transferred them back to Winnipeg at which time Patrick was diagnosed with leukemia at the age of 2. The next two years were spent in and out of the Winnipeg Children’s Hospital until Patrick’s death in 1965. At this point, Michael discovered his passion for enriching the lives of children and began his role of Santa Clause for the Winnipeg Children’s Hospital, which he did for the next 13 years.

While in Winnipeg, Michael and Jean expanded their family and had their daughter Michelle in 1968, and their son Shawn in 1971. Michael’s career with The Bank of Montreal ended in 1977, when the family moved to Altona, Manitoba. This is when Michael started working for D.W. Friesen and Sons, until his retirement 18 years later.

Michael was very committed to work. He was very involved with the Altona Mennonite Church, the Community Justice Committee, and the Altona Hospital Board. He also continued entertaining children as Santa Clause in the community.

Michael will always be remembered for being known as Santa Clause, the multitude of stuffed animals he kept in his car and gifted to children on the street, his weekly table at Chicken Chef, the never-ending loonies that burned holes in his pockets, his daily coffee dates with his the guys, and the ability to make friends wherever he went.

He is survived by his wife Jean (nee Irwin), daughter Michelle (Tim) Doerksen, and son Shawn (Carole) Tarnick, and grandchildren Stephanie Doerksen (Barry), Amy Penner (Tyler), Laura Doerksen (Colin), Kristen Tarnick (Colin), and Tyson Tarnick. He was also survived by many nieces and nephews. He was predeceased by his brother Johnny Tarnick, and by one son Patrick Johnathan.

A private funeral service will be held with ash interment at the Altona Cemetery. Donations in memory of Michael may be made to the Alzheimer Society.

The family wants to thank the staff of the Altona Health Centre and Eastview Place for the dedicated care they provided Michael over the last 2.5 years.

To view the committal and memorial service click on the video link below.

To order memorial trees or send flowers to the family in memory of Michael Tarnick, please visit our flower store.