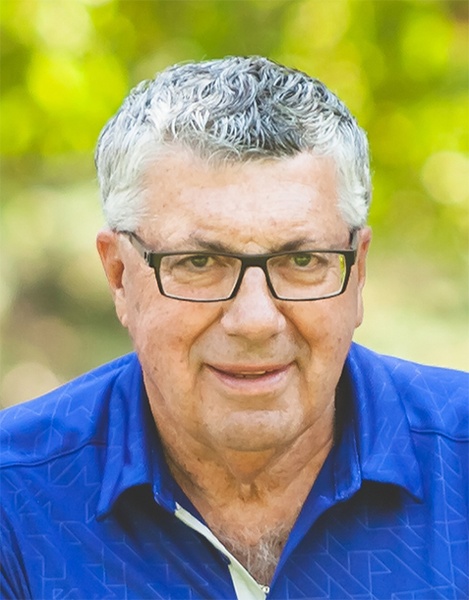 Menno H. Friesen cared.  A lot.  About pretty much everything.

He cared when and exactly how it was done. He cared about progress, traditions, the details, and ‘how it looked’. He cared how YOU were doing.  And our world will miss him for it.

Menno died just short of his 73rd birthday, after having to accept a life shortened by cancer.  He said, “I guess it’s our turn”.

As a young man he cared about crops, and focused on farming from the same Silberfeld farm where he’d been born.  And he cared about sports, passionately guarding third base in games of fastball, and exuding his feisty trademark determination on the ice.  Farming and sports defined him then.  And that sports passion directly led to his first job, when he was hired at the local seed crushing plant (CVO) in Altona…really only to ensure he could play hockey for the Maroons.

Prior to that big move “to town”, he had managed to woo a local girl from a sports loving family in Neubergthal, and married Jolanda Schwartz in 1965.

Not long after, Menno’s dedication and people skills were rewarded at work.  He cared about his career.  And as CVO transformed into CSP he was promoted to Procurement Manager.  This meant long road trips to see farmers all across the prairies.  He related well with those he met, as Menno was still farming - “on the side” - from that same family farm.  Somehow he seemed destined to stay in farming, in one way or another.

But in 1981 he was recruited to the realm of radio, and went from selling seeds to selling on-air advertising for Radio Southern Manitoba.  It was a big change; and a big opportunity.  Menno cared about success, and relished a role where the only limits were self-imposed.  The more he and his team could sell, the bigger the reward.  So he went to work, building a team he cared so much about.  Each new client, each new station, each new teammate, were motivated by his consistent honesty, enthusiasm, respect, and insight.  Menno wanted to know what made you tick, and cared to get it right. His pranks established a baseline banter with all those he came to know, and his network grew with his responsibilities.  Regional, provincial and national board positions followed, in both founder and supporting roles.  He Chaired so many committees.  Menno excelled at sales, and finally left hobby-farming in 1991, completely focused on growing the Golden West Broadcasting footprint, team, and family until retiring in 2010.

A Maroons hockey player (#11) and executive for many decades, he cared so deeply for the Maroons brand, creatively and consistently building a passionate fraternity that grew to include a minor hockey school, international hockey trips, the 400 club fundraising effort, and an ocean of maroon-coloured parkas, hats, jackets, touques, bags, pins, cups, trays, signs, tees, banners, and belt buckles.   Whenever its future was threatened, Menno could be counted on to care… enlisting local support to find the dollars, facilities, or personnel to keep the Maroons going strong.

Golf was a way to show individual fortitude: a way to test one’s focus and response to pressure.  Menno thrived here, winning many holes, rounds, games, tournaments (groups!)…and many ‘snips’. He finally collected his first hole-in-one when well into his 60’s.

Baseball was actually his favourite sport. After decades of playing, coaching, teaching, umping, and just being a fan…he focused his attention toward building the Field Of Dreams - a professional grade ball-park – together with a group of dedicated friends.

Menno also cared immensely about community: from the Sunflower Festival to the Gardens on Tenth, from the Pioneer Centre (and then MEC) to his Church to the Altona Community Foundation.  Never apathetic.  Always involved.  Ready to give.

And he cared for his family. He made time for the important things, and had energy to teach, watch, help, and cheer…and to have a little joke or three along the way.  He cared about the yard, his vehicles, and about being kind.  Menno ensured the call of active, energetic participation translated to the whole family.  He found time and energy to ensure family trips happened early and often, driving his family and camper across Canada…and later flying around the world as a retiree with his wife and their friends.

He showed us to care for our community, our work, our passions, our family, and for each other.

A celebration of Menno's life was held on Monday, June 18, 2018 at the Millennium Exhibition Centre (MEC) in Altona, Manitoba.  A private family burial was held prior to the service.

Donations in memory of Menno may be made to the Altona Community Foundation.

To order memorial trees or send flowers to the family in memory of Menno H. Friesen, please visit our flower store.