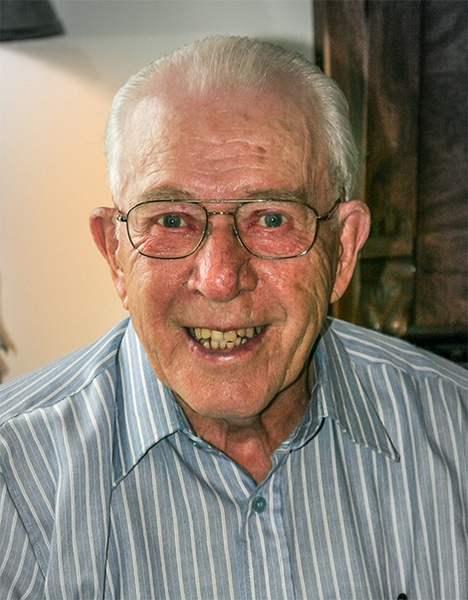 Our beloved father, grandfather, and great grandfather, Menno Funk, entered the gates of heaven on April 21, 2020, at the Altona Hospital after a brief hospitalization. His was an extraordinary life of 95 years which we celebrate, with thanksgiving!

Menno was born on January 9, 1925, to Jacob N.H. and Katharina (Harms) Funk in the Altbergthal School District, west of Altona. He was the second of 5 children, and had many fond memories of farm life in a loving home and community. In 1941, Margaret Schroeder caught Dad’s eye and they married in July, 1947, after Dad had served as a Conscientious Objector (CO) the latter part of World War II and then started work with CVO as it began operations in Altona in 1945.

Menno and Margaret established their home in Altona, where they raised four daughters. Theirs was a loving and welcoming home with an emphasis on faith, education, hospitality and service. Menno spent his entire career of more than 45 years with CVO/CSP Foods/Bunge, and his contributions as the Production Manager were valued by many.

Dad embraced life with vigour, enthusiasm, and a vibrant interest in others and the world around him He was a humble man of faith, intelligence and integrity. Dad and Mom were active members of the Altona Bergthaler Church throughout their marriage as deacons, Sunday School teachers, and Dad as a lay minister for years. Faith was central to both their lives.

Dad was also very community minded as an avid Altona supporter (licence plate was ‘ALTONA’), a volunteer fireman and ambulance driver for years, an Altona Town Council member, and a representative on the Credit Union and numerous other Boards. He loved participating in and following numerous sports and after no longer being involved in baseball, hockey and curling, was able to continue golfing through the summer of 2019.

After the death of Margaret in 2010, following almost 63 years of marriage, Dad persevered and remained a shining example of gratitude while maintaining his keen interest in life, no matter the circumstances. Even as health was failing in the past year, he remained a man of faith, integrity and pragmatism who loved and followed Jesus.

Menno was an amazing grandpa and great grandpa who was always welcoming and accepting of all who entered the family over the years. His love for family was unconditional. The extended family was thankfully able to make Zoom contact with Dad/grandpa/Opa Funk on the Easter weekend, just before hospitalization was required. He was cherished and will be dearly missed!

A private family service and interment at the Altona Cemetery was held on April 24, 2020 and a memorial service will be planned for a later date. Arrangements by Wiebe Funeral Home, Altona. Donations may be made to the Canadian Foodgrains Bank or Blue Sky Opportunities. A heartfelt thanks goes to the Altona Hospital staff for their compassionate care amid the COVID-19 restrictions. For the many prayers, condolences and offers of support, we thank you. Our Dad always believed that "For to me, living is Christ and dying is gain." (Phil. 1:21).

To order memorial trees or send flowers to the family in memory of Menno Funk, please visit our flower store.