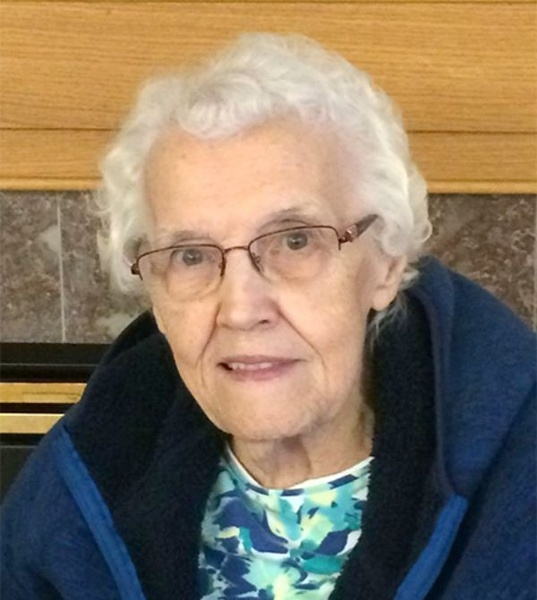 Mom was born on February 27, 1937 to Diedrich and Noelinora Wiebe (Dyck) in Carrot River, Saskatchewan. She was the third of 6 children. She grew up in the Carrot River area and as a teenager she moved to Manitoba to Inwood where she met the man of her dreams, Peter Dyck. They were married at St Laurent, MB on November 6, 1955 a double wedding with dad’s brother Dave and Mary Dyck.  She had worked as a housekeeper prior to there marriage. She was baptized upon the confession of her faith and her faith carried her through life.

Mom was a commited wife to Dad and mother to her children. She always grew a big garden and did lots of canning.  She sewed alot of our clothing. And she baked the most awesome buns and bread. The boys would finish a whole loaf for an after school snack.  Mom and Dad did a bit of farming and she always enjoyed doing the chores and could milk the cows in record time.  She supported Dad in the ministry and the work in the church.  She helped us learn our Sunday School and DVBS verses and it was important to her that we would learn to live for Jesus.  We loved having her at home when we came home from school.

Mom’s life changed when Dad was called home to heaven on July 6, 1978. They had been married for almost 23 years and this was a season of life that her faith carried her. She was strong and moved forward.  She started working away from home to support herself and the younger children.  She worked at various jobs, Painting with ladies that became great friends to her. She owned a Fabric Store for several years, worked at OTC, Friesens Lunch Room and then worked as a Home Care Worker.

She had problems with her legs from a young age and that made life difficult for her many times. Later in life her health deteriorated due to falls and fractures.    This eventually lead to her move to Eastview Place which was her home for the last nine and a half years of her life. The hip fracture she endured 2 and a half years ago took her quality of life.  Keeping her bed and wheelchair ridden. Yet she was mostly possitive and appreciative of those around her.   On April 8th at 12:40 am  Jesus called her home to Himself and she was reunited with Dad.  We rejoice for her for the release of her pain and discomfort and her arrival in Glory.  We will miss her very much.

She is survived by her 5 children, their spouses, her grandchildren and great grandchildren.  By 1 brother Jake (Nettie) Wiebe and sisters in law Anne Wiebe and Susie Peters.  Also by sisters in laws Rose Dyck, Kathy Dyck,  Mary (Dave) Dyck Epp and Susanna Dyck. Many nieces and nephews.

She was predeceased by her parents Diedrich and Noelinora Wiebe, her brothers John(Sara), Diedrich, Ben(Nettie), her sister Nettie(Bill) Peters. And by her great grandson Dylan Wall. Her parents in law Peter K and Sarah Dyck and dad’s siblings.

Honor her for all that her hands have done, and let her works bring her praise at the city gate. Proverbs 31:31.

As a family we would like to thank those that have visited our Mom through the years.  We thank the staff at Eastview Place for the care they have given Mom.

Funeral service was held on Tuesday, April 12 at 11:00 a.m. at the Altona EMM Church with burial at the Schoenthal Cemetery.

Donations in memory of Mary maybe made to Eastview Place.

To order memorial trees or send flowers to the family in memory of Mary Dyck (nee Wiebe), please visit our flower store.