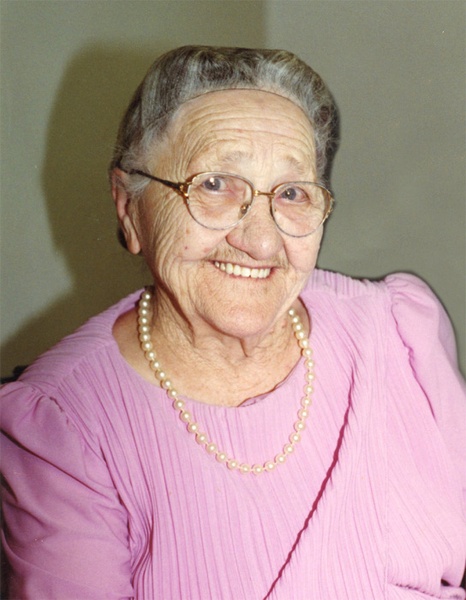 Maria Sawatzky was born in Blumenthal, Manitoba on November 15, 1914, to Johann and Aganetha Penner.  She was the oldest of four children who survived from this union.  Maria’s father died in 1918 of the Spanish flu.  Four more children were added after Aganetha married Cornelius Penner, brother to Johann.

Maria started her schooling at age eight, in part because by that time there were three of them of school age, so that made better use of the horse and buggy used to get them to school.  At age 14, she went out to work.  She worked in various homes as a maid, a cook, and a gardener.  Maria also looked after the children and helped with many outside chores.  Her monthly pay was $5.00 plus room and board.

Maria married Gerhard (George) Sawatzky on July 1, 1937.  After living with her parents for two years, they (with their newborn daughter, Lena) were able to move into their own 2-room house with attached barn.  Maria was ecstatic and thought life couldn’t get any better.  Two more children (Mary and Peter) were born to them while they eked out a living on their small farm.

In 1967, after all three of their offspring had moved away, Maria and George moved to a small 5 acre parcel of land near the Halbstadt store.  After her husband passed away suddenly in 1980, Maria moved to Altona, where she first lived in a small house on 2nd Street till she was 83, then in North Villa Apartments till the age of 98.  Her last two years were spent in Ebenezer and then at Eastview Place where she passed away peacefully on August 10, 2015.

To order memorial trees or send flowers to the family in memory of Maria Sawatzky, please visit our flower store.