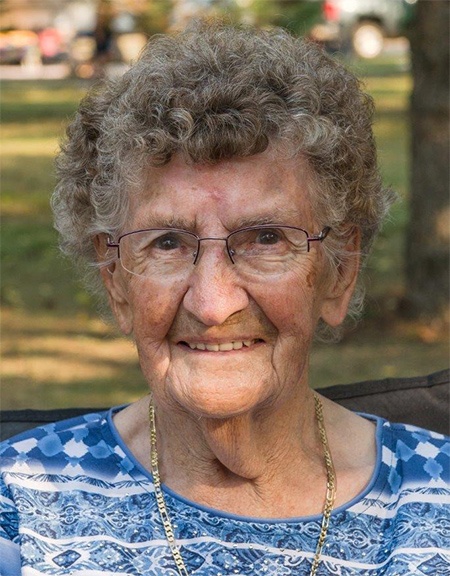 Maria “Mary” Voth (nee Doerksen) was born on September 4th, 1923 in the Village of Sommerfeld to her parents David and Elizabeth Doerksen.  After a brief illness, at the age of 97 years, she passed away peacefully at the Altona Memorial Health Center on October 7th, 2020 with her family by her side.

She was predeceased by her parents, three sisters, two brothers, her husband Peter Voth, son Victor in infancy and great grandson Broden Trithart.

Mary was raised on the family farm in Sommerfeld and the surrounding farm land always remained dear to her heart.  Upon confession of her faith she was baptized on May 13th , 1945.

After a brief work experience at a fish canning factory in B.C. in the late 1940’s, she returned home where she met a young farm boy by the name of Peter Voth.  That relationship blossomed on the fertile plains of southern Manitoba and resulted in their marriage on a wet soggy day on October 1st, 1950.  That union lasted for 62 years until husband Peter’s passing.

After retiring from farming they moved to Altona in 1982.  That didn’t deter the desire to plant and harvest, but was just done on a smaller gardening scale.  This was part of her life until mobility in the latter years prevented that.

During the early years of retirement, she was also active in volunteering at the MCC store in Altona, feeding at the Care Home and being part of the ladies’ groups in the Bergthaler Mennonite Church where she was a long-term member.

At age 95 she was still able to get into a combine and go for a ride during harvest time. This was a feat not only greatly enjoyed by her, but relished by the rest of the family who witnessed this accomplishment.

The land and farming were always part of their life.  The family was raised on the farm in Sommerfeld and she with her husband created the foundation of the farm that was passed on to their children and expanded and currently being operated by their son and grandsons.  Until her death she was always cognizant of what was happening on the farm as that was always important to her.  She was also a constant focus of family communication knowing where her children & grand children were and what they were doing.

While the matriarch of the family has passed, the family is comforted by her many years of good health, both mentally and physically.  She was truly of pioneer spirit and a role model to be honored for her faith, commitment to family, her love of farming and willingness to help those in need when she could.

Noted in her family journal is scripture from Romans 12 vs 6 “We each have different gifts, according to the grace given us…”   She graced the lives of many with gifts of love and kindness.

She will be missed.

The family would like to thank the staff and the Altona Memorial Health Care staff for their care of mom in the weeks leading up to her passing.  The family would also like to acknowledge the friends at Centre Court Plaza in Altona where she spent many hours puzzling, visiting and sharing meals in a great social atmosphere. She truly enjoyed that.  Also, to be acknowledged is her special friend Nora, who helped her so many times, in many ways and it was truly appreciated by her.

A graveside service was held at the Altona Cemetery on October 11, 2020. If people so desire, donations can be made in her memory to Parkinson’s Canada and the Canadian Food Grains Bank.  Both charities were important to her.

To order memorial trees or send flowers to the family in memory of Maria "Mary" Voth, please visit our flower store.