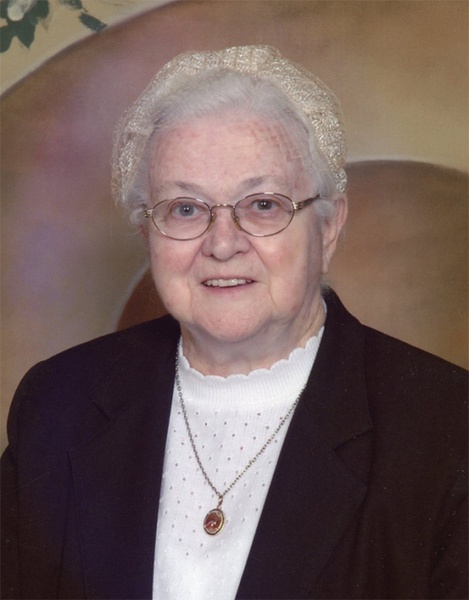 Maria Loewen was born March 13th, 1925 to Heinrich P. & Helena (Hamm) Dueck at the farm near Grimsby School District where she attended school. She was baptized May 22, 1946 by Bishop Peter Toews at the Rudnerweide Sommerfeld Church. On July 9th, 1946 she married Benno Loewen. They lived with his parents for about three months and then they moved to her parents place. They lived in the same house with them till May 1950 at which time they built a small house on the yard. They worked for her parents till 1957, then when her father passed away they bought a farm at Sewell in 1958. They lived on the farm until 1987 when they moved to Altona.

She enjoyed crocheting, knitting, needle point, liquid embroidery, and sewing. After they retired from the farm they both volunteered at the Altona MCC. There she found her passion, donating her time and energy fixing and dressing dolls for the MCC. She managed to restore over a 1,000 dolls before her health would not allow her to continue. Another passion was gardening, she was very particular, and the rows had to be straight as an arrow, not a weed in sight. While living at the Centre Point Plaza, she even rode her scooter with a pail filled with water to water the plants. She loved flowers, she could make anything bloom. Many people may not know but she had a great talent for drawing and colouring.

Three years ago she suffered her first stroke, which compromised her speaking ability and required her to move to Eastview. Then on Sunday, April 9th, 2017 she suffered a massive stroke. She was paralyzed on her left side and she never regained consciousness. 10 days later with her family at her side, she passed away peacefully on Wednesday, April 19th at 3:00 p.m. at the age of 92 years, 1 month and 6 days.

The family wishes to thank all doctors, in particular Dr. Bueddefeld, and nursing staff at the Altona Health Centre and at Eastview Place. Rev John F. Klassen, song leaders, organist, pallbearers, ushers, Ladies Church Group for serving and Wiebe Funeral Home (Altona) for their kind and courteous service. In lieu of flowers donations can be made to a charity of your choice.

To order memorial trees or send flowers to the family in memory of Maria Loewen, please visit our flower store.