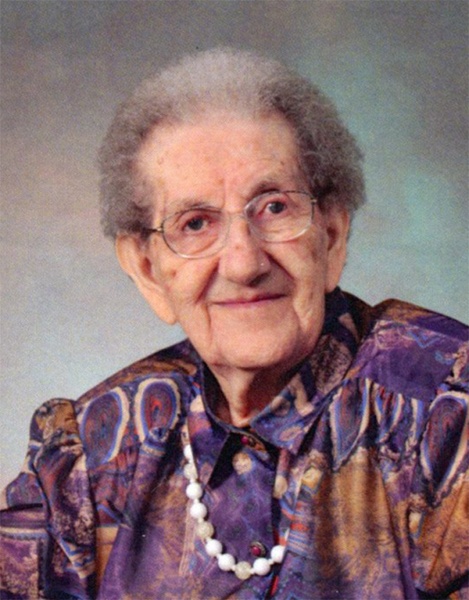 Friends and family are saddened by the passing of Margaret Nikkel on Tuesday, March 21, 2017 just 19 days short of her 99th birthday.

Margaret was a long time resident of Altona.  She was born to Katherine Nikkel (nee Wiens) and John E Nikkel in Altona during the First World War, when Altona was still a village with a population of fewer than 400.

Margaret left home for Winnipeg when she was 18 in 1936 to pursue her dreams of nursing.  She returned two years later to a dedicated lifelong career of nursing at the Altona General Hospital now the Altona Community Memorial Health Center.  Her career began in Altona's very first 15 bed hospital on the north side of 6th Avenue NE in 1938 moving to the newly built Altona General Hospital in the late 1940s.

She assisted in countless surgeries, attended thousands of births, and was known throughout her career as a tireless caregiver always willing to work an extra night shift if required.  She had the opportunity to work with many of Altona’s his first doctors including Drs. Simpson, McNeil, Boreskie, and Toni.  At age 55 Margaret retired from nursing and took over as Hospital Housekeeping Manager for another 10 years finally retiring in 1984 after 46 years of dedicated service.

Margaret was a devoted member of the Altona Bergthaler Church.  She sang in choirs, taught Sunday School, volunteered on committees, and served her church community wherever and whenever possible.  She was a tireless volunteer.  In addition to her daily church commitments she knitted thousands of pairs of mittens, socks, scarves and sweaters for MCC Relief which have found their way around the world. She also adopted numerous homeless children and through her donations to their overseas caregivers enabled many successful life outcomes.

She was an avid gardener, traveler, seamstress, and loved cooking and baking.  Her Zwieback was much sought after. She was a voracious reader and instilled that same passion in many of her nieces and nephews.

Margaret did not slow down in her retirement. She continued to volunteer and donate her time and energies to many charitable causes.

She was the family historian, recounting many stories of her grandparents who settled the West Reserve.  She maintained a historical collection of family photographs and her memory of genealogical timelines was impeccable.

Funeral service on Sunday, March 26, 2017 at 2:00 p.m. at the Altona Bergthaler Mennonite Church.  Interment will take place at the Hochstadt Cemetery. Viewing at Wiebe Funeral Home Altona on Saturday, March 25, 2017 from 9:00 am to 9:00 pm, and at the church prior to the service.

Donations in memory of Margaret may be made to Christian Blind Mission.

To order memorial trees or send flowers to the family in memory of Margaret Nikkel, please visit our flower store.