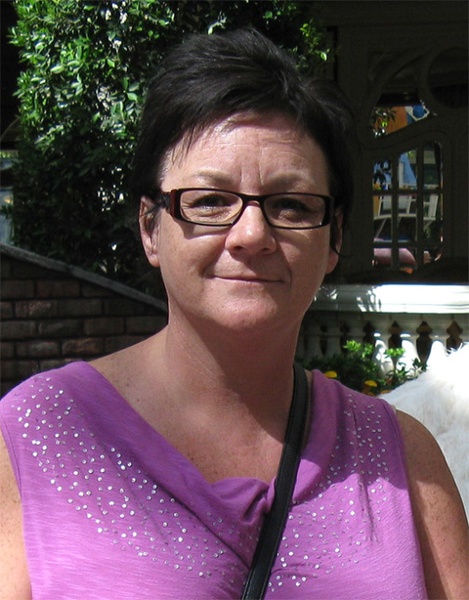 Lorraine was born at the Altona Hospital to Jake and Anita Braun on June 16, 1962 and lived on the family farm, west of Altona. As she was the youngest of four siblings, she had the benefit of getting away with things the others could not. She was well known in the family as a picky eater, not cleaning up after herself and being stubborn when told to do most family chores. Of course this got the ire of her brother Barry, who happened to be a professional at getting under the skin of Lorraine. She may have gotten away with more than the other three, but Barry made her pay dearly out in the yard with twist holds until Lorraine would scream “I give”.

Lorraine spent all her school years in Altona. The High School years were especially fun for her, as she found working part time at the Den of Denims could give her enough money to enjoy some of the finer things in life with her school friends. In grade 12, she started to hang around with a long haired boy from Horndean.

She ended up marrying that boy on July 13, 1985 and officially became known as Lorraine Nickel. Her and James lived in the house where James grew up in Horndean. During their early years of marriage, Lorraine worked as a bookkeeper for Speerhead in Altona. Lorraine quickly changed her ways and became an impeccable housekeeper. A clean house became an obsession, although she still struggled with cooking. Barry, who couldn’t yet quit picking on her, would often comment that Lorraine must have the cleanest oven in Horndean, because she never used it.

This too changed after the kids were born. Jayden in 1989 and Taylor in 1991. She was a stay-at-home Mom while the kids were young and turned out to be a good cook. Lorraine passed down her trait of being a picky eater and became a master of cooking separate meals for James and the kids. Lorraine did the books for the farm, took on some part-time jobs and was always busy in the home making and delivering meals at harvest time.

In 1995, the family sold the house in Horndean and moved to Altona. This move made it easier for Lorraine to find full time employment and still take care of the kids. She was working at CFAM, when in 2002 Lorraine was diagnosed with breast cancer. While devastating, she concentrated on getting better. After a few operations, Chemo and Radiation she recovered.

Lorraine eventually started working at Manitoba Housing Authority as a Property Manager. This turned out to be a perfect job. Lorraine was always compassionate for those who were less fortunate. Her tenants came from all walks of life and no matter whom, what or why, Lorraine made sure to find them the appropriate housing they needed. Lorraine was loved by her tenants. She only requested two things, rent had to be paid on time and their place had to be kept clean.

Over the years, Lorraine loved to travel. Whether it was the whole family, close friends, or just her and James. Her travels took her to places like Detroit Lakes, Gimli, Niagra Falls, Toronto, Minneapolis, Phoenix, Los Angeles, Las Vegas, Mazatlán, Puerto Vallarta, Bucerias, Rincon De Guayabitos, Huatulco, Negril and Ixtapa. But her favourite vacations were camping.

Lorraine’s cancer returned in 2015. She went on long term disability from her job to try and fight this thing one more time. For 4 years she fought as hard as she could. In public she never let it known how hard that fight was.

The family would like to thank Dr. Woelk and all the nurses at Boundary Trails, Cancer Care Unit. They all delivered such kind and compassionate care. We can’t count the many stays Lorraine had there and every time, all staff were so nice to her.  Our family will never forget the work you do. Thank You.

A social gathering , celebrating the life of Lorraine Nickel was held at the Rhineland Pioneer Center in Altona, May 24, 2019.

Donations may be made to:

To order memorial trees or send flowers to the family in memory of Lorraine May Nickel, please visit our flower store.