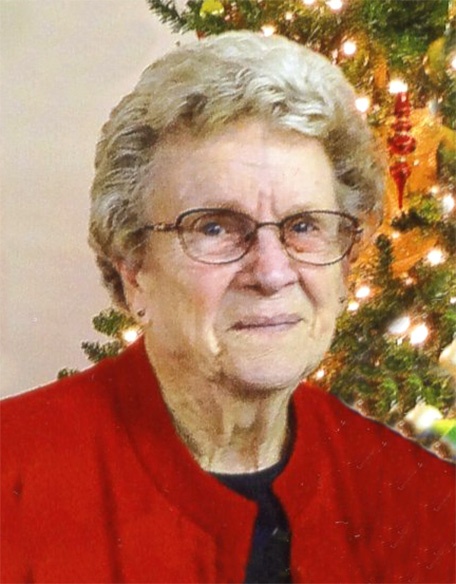 It is with much sadness that we announce the passing of Lillian Hruda (nee Dyck) on October 30, 2020.  Lillian passed away at the Altona Hospital with her daughter by her side.

She was born in Plum Coulee, Manitoba to John W. and Henrietta Dyck. From Plum Coulee she moved with her family to Lanseer and eventually to Gretna where she met and then married Menno Hruda in September of 1949. They lived in a few small towns in Saskatchewan in the early years of their married life when Menno had a job hauling pipe for the pipeline, but eventually they came back to Gretna and settled into the house on Schellenberg Avenue for the rest of their married life.

She was baptized in 1958 in the United Church but after Menno's passing, she transferred her membership to the Gretna Bergthaler church where she enjoyed being a greeter and attended there as long as her health allowed.

Lillian enjoyed a variety of different hobbies like curling, gardening, working on her yard, feeding birds, knitting and crocheting, going for coffee and walks.

She leaves to mourn her daughter Norma and husband Jim, one daughter in law Sharon, son in law Doug (Bev), 7 grandchildren and their spouses, and 6 great grandchildren. She was predeceased by her husband Menno in 1999, her daughter Janet in 2013 and her son Steven in 2016, her parents and parents in law, 1 sister, 3 brothers, 5 sister in laws, 3 brother in laws, 1 niece and 1 nephew.

Although we are terribly sad that she is no longer with us, what better place to be than in heaven with Jesus and reunited with her family.

To order memorial trees or send flowers to the family in memory of Lillian Hruda, please visit our flower store.