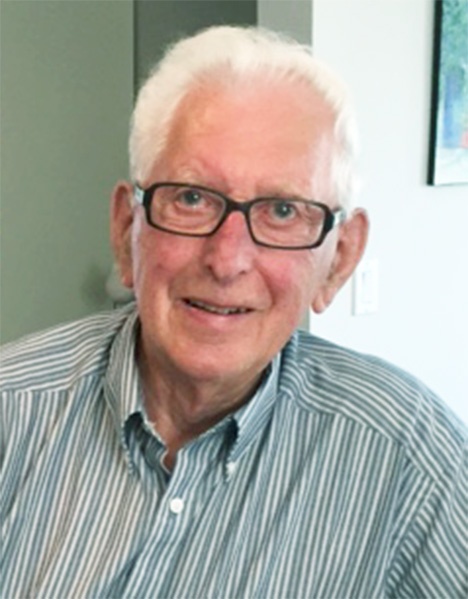 He will be deeply missed by his wife, Kathleen; children Ian (Lynn), Sheila, and Andrew (Ruby); grandchildren Lindsey Jacobson, Quin and Kaitlen Forrester. He is also survived by his sister Jean Hewko.

Leslie was predeceased by his parents Willo and Marjorie (nee Lovering), his siblings and their spouses, William (Lila), James (Thelma), and Ruth (Gordon) Breckman and his brother-in-law Lou Hewko.

Born and raised in the Aux Marais district near Emerson, Leslie experienced the joys and challenges of farming from an early age and wholeheartedly chose to make it his life. On February 6, 1957, he and Kathleen Baird were married in her hometown, Glasgow, Scotland and returned by ship to Canada. For the next 58 years, they resided at NW 20-1-2E, working together in all aspects of farm, family, and community. Their home became a welcoming hub for neighbors, extended family, and visitors from near and far. When their son, Ian, and nephew, Jon, joined the farming operation, they found more time to travel and for Leslie to continue his commitment to various organizations.

Community projects were always very important to Leslie. He was very involved in the planning and construction of St. Andrew’s United Church, the Emerson Community Complex and the Halbstadt Marais Water Co-op. His passion for restoring sugar beet equipment led him to help establish the Sugar Beet Museum in St. Joseph. Recognizing the need to preserve the past; he and Kathy were delighted to participate in the re-enactment of the NWMP March West in 1999. He was a member of the Post Road Heritage Group and spent many hours at the Fort Dufferin site.

Leslie belonged to the provincial board of the Manitoba Sugar Beet Growers Association. He embraced the concept of the Canadian Foodgrains Bank from its inception and was part of the local CHUM project for many years. In 1993, Les and Kathy were named the Red River Ex. Manitoba Farmers of the Year.

For many years, Les and Kathy traveled to British Columbia in winter. They also visited Scotland many times and ventured as far as Australia and New Zealand. Leslie loved coffee time, enjoyed curling and the Blue Bombers. He read every Dick Francis book available!

In July, 2015, Les and Kathy moved to an apartment at The Gardens on Tenth in Altona. Les delighted in meeting people and this continued in their new home.

Leslie often ended conversations with, “Take care.” and he in his turn was taken care of by the staff at the Altona Hospital and the Emerson Personal Care Home. The family would like to thank the staff for their compassion and dedication.

To honour Leslie’s commitment to the work of the Canadian Foodgrains Bank donations to the CFGB would be gratefully accepted.

A private memorial service will be held in Emerson at the St. Andrew’s United Church.

To order memorial trees or send flowers to the family in memory of Leslie Forrester, please visit our flower store.