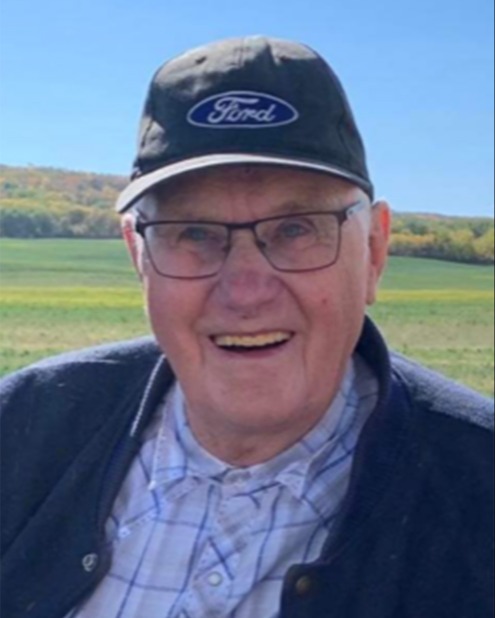 Kenneth Gordon Johnson, known to all as Gordon, of Vita Manitoba passed away on October 22, 2022 at the Vita Hospital at the age of 83.

Gordon is survived by his loving wife Sonya, his three children Kevin (Kerry), Valerie (Darren) Bodz and Terry, his five grandchildren and two great grandchildren, Joyce’s children and grandchildren, treasured nephew Craig (Lisa) McCarthy and their family, Sonya’s daughters and their families, the mother of his children, Dorothy and a host of relatives and friends.  Gordon was predeceased by his parents, Mary and Jacob Johnson, daughter-in-law Shelly Johnson, sisters and their husbands Louise (Bruce) Dickson and Elva (Bill) McCarthy, step-son Michael Rolfe as well as his previous wife, Joyce

Gordon was born in Woodmore, Manitoba to Mary and Jacob Johnson on February 17, 1939. He attended Woodmore School and farmed in Woodmore, Glenboro and alongside other farmers throughout most of his life.  Gordon also worked with race horses at Dunvegan Farm, as well as for the Municipalities of South Cypress and Stuartburn, as a school bus driver in Glenboro and at the Vita Funeral Home as assistant funeral director.

One of Gordon’s real passions was his love of horses, riding in Sandilands or giving grandchildren and neighbours sleigh rides.  He leaves behind his horse of 14 years, “Seven” who is now living a life of leisure with Kevin and Kerry in Kaleida.  He loved to ride, train and care for his horses and enjoyed sharing his knowledge in these areas with others.  Gordon enjoyed many friendships with riding friends and said that he felt closest to God when he was out on the trails.  He also loved to dance, and they rarely missed a Wednesday night at the Pat Porter Centre.  Gordon was a community person, starting up the 4H Pony Club in Glenboro, volunteering with rural Crime Watch in the area, serving on the Vita Veterinary Board, the Greenridge and Glenboro United Church Boards and the Vita Hospital Board, as well as being president of the Vita Friendship Centre.  He dedicated countless hours providing outings and activities for seniors in the Vita Personal Care Home.

The Celebration of Life for Gordon will be held outdoors at the Greenridge Cemetery (consider bringing a lawn chair) on Saturday, October 29, 2022 at 2 PM with Pastor Mark Funk officiating.  Lunch in the church basement to follow.

Memorial donations in memory of Gordon may be made to the Vita Friendship Centre, Box 322, 226 Home Street, Vita, Manitoba, R0A 2K0 or a charity of your choice.  The family wishes to extend their sincere gratitude to Dr. Trish Penner and the staff of the Vita Hospital for their exemplary care and to everyone who stopped by to visit Gordon.

To order memorial trees or send flowers to the family in memory of Kenneth Gordon Johnson, please visit our flower store.