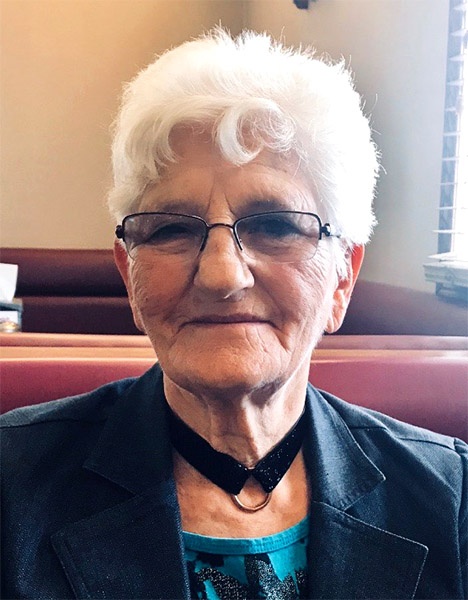 She is survived by her husband John B. Penner; son Herb (Val) Penner and daughter Martha (Ron) Toews. Also survived by grandchildren Brody Toews (Azhami Male); and Bronson Toews. She was predeceased by her parents David and Katharina Loewen; nine brothers and three sisters (two in infancy).

Katharina was born on May 15th, 1936 and was the 10th child of David and Katharina Loewen. She was born in Gretna, raised in Neuhorst, and was the last survivor of the Loewen family.

She was united in marriage to John B. Penner on October 21, 1956. They spent the next 64 years living on the farm.  In 1957 they moved to a farm near Horndean, where she raised two children. The family then moved to the Penner farm  south of Plum Coulee in 1975. Against all odds and  both surviving a car crash in 2006,  Mom and Dad remained on that farm until February 6 2020. Mom had a few falls on the farm in December and after the last fall was hospitalized with a broken arm and pelvis. She recovered and we moved mom and dad to the Manor in February. Mom only lasted 2 1/2 weeks at the Manor and was hospitalized again with Congestive heart failure where she continued to decline.  On March 28 she was moved into palliative care and we were once again able to visit her in the hospital in spite of COVID. Very thankful that we had that opportunity.

Many words come to mind when we think of mom.... selfless, energetic, loving  and determined to name a few. She was a little lady but had so much energy and loved serving others. She had a strong work ethic, rarely sat still and was a tough farm girl. Mom was always busy cleaning, cooking and working on the farm. She taught Sunday school and volunteered at the Plum Coulee Thrift shop for a number of years. She also took in and cared for her blind mother Katharina for a few years on the farm.

Mom loved flowers and gardening. When she went to the greenhouse she was in her glory and we had a tough time getting her back home. Planting was her passion but as she grew older and weaker  it became too difficult but she was determined to continue. Dad finally had grass seed planted in the big garden plot so she wouldn't exhaust herself trying to plant a huge garden.  Mom also loved decorating for Christmas and would spend hours decorating the house usually in early November.

Mom loved her family and gift giving was her true love language.  Giving gave her great joy. Always thinking of others before herself. She loved her grandchildren and always took the time to babysit, play games and visit with them.

As she grew weaker in the hospital I remember asking her how she was feeling.. "I'm 100%" she said with a smile...even though it was obvious that she wasn't.  We are grateful for the time we had with her...being able to sit with her one last Mother's Day and birthday on May 15th.  Also thankful for the opportunity to be with her in her final moments so she wasn't alone.

You fought the good fight and you finished the race. Finally at peace knowing that God is your refuge, and his everlasting arms are holding you now.â¤ï¸

Psalm 73:26  “My flesh and my heart may fail, but God is the strength of my heart and my portion forever.”

We will always carry your memory in our hearts.

Donations in memory of Katharina may be made to Altona and District Palliative Care.

To order memorial trees or send flowers to the family in memory of Katharina Penner, please visit our flower store.