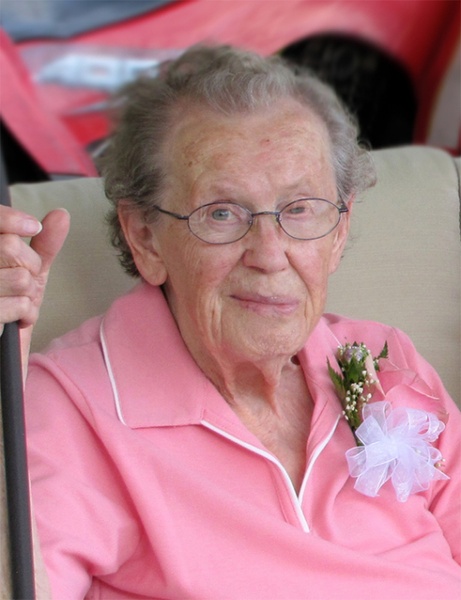 On November 30, 2015 at 3:30 pm, Justina Friesen passed away peacefully with family at her side.  She will be missed by her family including Jake and Marg Friesen, Bill and Nettie Friesen, Ray and Connie Friesen, Shirley and Greg Hildebrand and Marge Friesen.

Justina will also be missed by 9 grandchildren, including Michelle and Dan, Richard and Charlotte, Doreen and Kevin, Doug and Sherry, Kevin and Felicia, Devin and Kassy, Kelsey, Josh, Monica; as well 10 great grandchildren.

Three sisters, two brothers, and a large extended family will also miss her presence in their lives.  She was predeceased by her husband Abram A. Friesen, her son Leroy L. Friesen and daughter-in-law Annalore Friesen.

Mom was born July 31, 1920 to Peter P. and Justina Kroeker nee Zacharias near Plum Coulee, Manitoba.  From her earliest years mom was always a hard worker.  She was a great help to her own mother. So much so that her brothers and sisters have often said that she was like a second mom to them. Mom was often sent out as a kjaakjasche or domestic help to many neighbors.  Payment was sometimes enough fabric for a new dress.

In her teens mom and her brother Pete spent much time together.  Mom was older and would drive the car on outings, because Pete was too young, but if they had to take the buggy, then Pete drove.  Mom learned how to care for horses and other animals on the family farm and shared many memories of those experiences.  She often recounted a memory of standing on a chair to look out a window when her father came home with the horse and buggy.  The snow banks were so high and firm that horses had to go up and down and then disappeared into the barn on the other side.

Mom started her letter writing career as a young woman, writing to Pete, who was assigned a Conscientious Objector position in the Interlake of Manitoba.  She continued with this type of correspondence with family and friends until she was no longer able.

Mom worked at various positions in her twenties, including her parent’s store near Plum Coulee and for A.W. Harder in Rosenort, now called Rosetown, a cannery in Ontario, and she continued to take domestic positions.

In May of 1939 mom was baptized into the Rudenerweider Mennonite Church.  Mom’s faith was a quiet faith.  She regularly read her Bible and prayed for her family.  Her faith was evidenced in her actions all through her life.

Mom married Abram A. Friesen in October of 1953.  She adopted Jake and Bill and they were the sons of her heart.  In 1957 Raymond was born and Leroy followed in 1959.  In 1961 the long awaited baby girl was born and Shirley joined the family.

Dad’s health became poor soon after and mom’s experience in homemaking and coping were called upon as she needed to take a primary role in caring and providing for their family.  As a result of dad’s health, they moved off the farm in Altbergthal into a house in Altona in 1965. She worked part-time jobs including at a fabric store and as a cleaning lady at Hi-Way Inn. She also did some custom sewing for others.

Mom’s deep love for her family was evidenced in any way she could show it.  This included cooking, baking, sewing or just visiting.  All these things were done with a willing heart.  For instance, camping was a regular summer activity.  Mom was afraid that some wild animal would enter the tent during the night, so she and Shirley always slept in the vehicle for protection.  The boys were on their own!  After some time they did have a camper and mom would prepare many types of food from hamburgers to fresh blueberry pie, dough rolled out with a glass bottle.

Mom loved to see her family having fun waterskiing and fishing, but don’t ask her to get into a boat, wasn’t gonna happen!  She would get wet till her knees in the lake, if you were drowning.  She’d be yelling at dad “Don’t let my kids drown!” while he taught them to swim.

The boys and their friends enjoyed scaring Shirley’s monkey so that Herman would run up Shirl, sit on her shoulder and proceed to pee and poop all over her.  Mom sort of scolded the boys, but kinda thought it was funny, trying to hide her smirk. She did help Shirley get cleaned up.

Mom always knew, even without a phone call, when Jake and Bill would be coming home from Winnipeg for the weekend.  Even if it was late Friday night she would always have a pot of fresh coffee ready when they walked in the door.  They tried to get in the door quietly so that mom wouldn’t be woken up.  They even tried turning off the car at the end of the driveway and coasting to the house, but mom knew, and the coffee was ready!

In her early sixties Ray sold mom his blue Camaro. Mom often turned heads, as no one expected a little gray-haired lady to be driving a sports car. We often thought of the Beach Boys song “Little Old Lady from Pasadena”.

Family and friends and maintaining those relationships was very important to mom.  Her journals include many entries about visits to friends and family, often together with others.  Mom kept a daily journal of her activities and would occasionally comment to family members about what they had done in the past year.  We found many entries that mentioned baking and cleaning.  No wonder her house was always clean and she always had food ready to serve anyone who dropped by.

Family gatherings were not complete unless mom had made chicken noodle soup and buns.  No one made soup like mom did. She always had hand cut noodles and often homemade butter and they were all made with much love.

As each of her children married mom welcomed their spouses.  She loved the role of grandmother and her grandchildren were the recipient of many hugs and kisses. You couldn’t leave grandma’s house without a hug and a kiss, even in her last days, when the dementia kept her from remembering who you were.

Mom’s last years were difficult for her as memories, thoughts and responses were no longer the mom we had known and loved all these years.  By 2011 she was no longer able to live independently and moved into the Ebenezer Home apartments in the care of 24/7.  By January of 2012 mom’s needs became great enough that she moved into Eastview Place.  Although this transition was difficult for mom, the care she received from staff at both facilities enabled her to retain her dignity and gave us peace of mind when we couldn’t be there with her.  Her physical health also deteriorated during the last years and she spent much time in her wheelchair.  She enjoyed visits and usually acknowledged a friendly face.

We would like to thank uncle Pete and aunt Betty for their help and support over the last years.  Their more flexible schedules and unique understanding of their sister gave them opportunity to spend time with mom which she greatly enjoyed.  We would also like to thank the staff at Altona Bergthaler Church who visited her  and prayed for her as well as Wayne Loeppky who brought her the weekly church bulletin.  Staff at Ebenezer Home and Eastivew Place were patient, kind and supportive and made mom’s life so much better.  She had many good doctors over the years, most recently Dr. Jock Prinsloo and Dr. Tehmina Ali and we appreciated their care.  We would also like to thank Pastor Peter Bartel and those who participated in the service today as well as the church serving group for serving the lunch today.

Many thanks to Trevor Groening and Wiebe’s Funeral Home for their care of mom and their assistance during the last week.

Thank you to everyone who came today and for your care and support of the family over the years.  May God bless you.

Donations may be made to Eastview Place or the Alzheimer’s Society in mom’s memory.

To order memorial trees or send flowers to the family in memory of Justina Friesen, please visit our flower store.