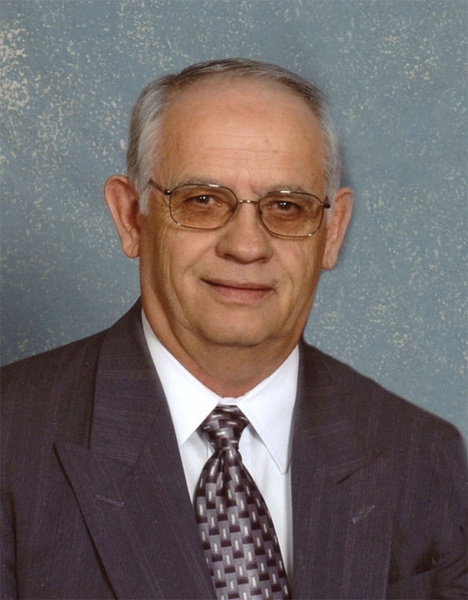 It was 73 years ago, on January 27, 1944 that the home of Gerhard and Sarah Unger was blessed with the birth of their son Johan, in Blumenhof, Mexico.  John spent his childhood in Mexico where he met and married his sweetheart, Margaretha Peters.  Grandpa was a charmer and won her affections, as seen in a family photo album, where she is pictured smiling while reading one of his love letters.  Their love led to a wedding in the summer of 1961 and grew to include a large family.

To support his family while living in Mexico, grandpa managed his dad’s village grocery store with his brother, and also began his lifelong side income of repairing watches and clocks.  Farming was a way of life in the village, and it was no different for the Unger family.  Grandpa also occasionally bought a load of used equipment and tools from the U.S. and sold it for profit.

However, grandpa had visions of making a better life for his family and made the decision to move to Canada in March of 1969.  Due to the kindness of friends and strangers they were able to begin the first challenging years of living in a country where they did not know the language.  Grandma and grandpa crossed the border with nothing but a few blankets in the car of a hired driver, 5 children and a wife about to give birth to baby number six in two weeks.  This experience speaks to the kind of determination grandpa had to achieve what he felt was important.

The family spent several years moving from one temporary home to another in the Altona and Winkler area until finally building a home on Spruce Crescent in 1979.  This bungalow housed a total of 10 people, including 5 sons and 3 daughters.  It was the scene of many family gatherings throughout the years.

Grandpa’s employment in Canada consisted of a variety of jobs, including welding at what is now known as Conquest Manufacturing and working for the Town of Altona Public Works.  It was always a thrill when he came home with the equipment in winter to push the driveway snow into a huge snow hill, providing hours of fun for his children.  He and grandma also leased Four Winds Restaurant for a brief time.

Throughout all of this, grandpa’s interest in repairing watches and clocks for income remained, and there was a basement room dedicated to that.  However, we believe, and thousands would agree, that he found his ultimate calling when he began his career in reflexology and trajchtmoeking.

Grandpa had a God-given gift for feeling what a person needed in terms of physical healing.  He complemented this gift with a Reflexology course in Winnipeg and began working as a reflexologist part-time.  This eventually led to a full time career that lasted over thirty years, until he was forced to quit due to arthritis.  It was extremely hard for him to have to stop doing what he loved – and that was helping people.  He received such incredible joy from knowing he had changed someone’s life for the better in this way, especially if he was able to accomplish what others couldn’t!  Grandpa loved these challenges and considered it a personal victory when someone no longer needed his healing touch.  His face would light up with a smile when he heard a stubborn joint “snap” into place.

As the arthritis began to worsen, grandma slipped into the world of dementia.  No longer being able to care for the yard and having to move his wife into full time care, the home on Spruce Crescent was no longer ideal for grandpa.  He sold the bungalow and moved into Gardens on 10th in May of 2015, one of the first residents of this condominium complex.

Grandpa was a meticulous man, incredibly organized and a researcher by nature.  He loved his techno gadgets and would spend hours trying to find the best deal on his latest toy.  He prided himself on buying quality, but getting it at a discount.  Grandpa also loved to tease and was well-known for his joking ways.

There weren’t many summer evenings where you wouldn’t find grandpa biking around town.  He enjoyed a stint of driving electric scooters and later moved on to electric bicycles.  Usually his destination was going for coffee with friends and stopping in at the homes of his children who lived in Altona.

Many friends and family have also spent hundreds of hours playing games with grandma and grandpa, especially Mexican train and card games like Crazy Rummy.  He also took his love of games online.  Grandpa took several courses over the years to increase his knowledge of computers.

Grandpa enjoyed good health for the most part and was an advocate for natural therapies and taking your supplements, even stocking and selling them to his many reflexology customers, and others.  However, in April of 1997 grandpa suffered a major heart attack and we thought he wasn’t going to make it.  After a triple by-pass and surviving this huge scare, grandpa had a life change and mentioned many times how grateful he was for the saving grace of the cross and how thankful he was for God’s forgiveness.  He started showing a very compassionate heart and would choke up from every hug and “I love you”.  His sometimes rough exterior still couldn’t hide his strong love for his wife and family.

Grandpa struggled with sinus issues for many years and led to him experiencing what was thought to be a sinus infection.  After four rounds of antibiotics, his condition worsened and in December of 2016 tests confirmed that grandpa had cancer, specifically Squamous Cell Carcinoma.  Grandpa said he was ready for Heaven and wanted to go there, but decided to fight the cancer with chemo and radiation.  After one treatment, he realized this was not the route for him and we were then told the cancer was terminal and treatments and surgery wouldn’t help anyway.  With barely more than a 2 month battle with this disease, grandpa moved into Palliative Care permanently on February 9th.  In the beginning of his last week of life, grandpa was still talking, eating, visiting and joking around at the side of his hospital bed.  He so appreciated his visitors.  However, his health took a rapid turn and led to his passing on Saturday morning, February 18th at 6:25 a.m.  He took his last breath, resting peacefully with family by his side at the Altona Hospital.

John W. Unger was 73 years and 22 days old when he went to his eternal home in heaven.  He is survived by his wife Margaret, 5 sons, 3 daughters and their families; daughter Marge Doerksen, son George and wife Martha, son Henry and wife Ruth, son John and wife Shirley, daughter Tina, son Pete and wife Verna, daughter Sara and husband Mike, son Corney and wife Barb.  His eight children blessed him with nineteen grandchildren and fifteen great-grandchildren.  Three of these were born during his last week of life.

Grandpa touched thousands of lives and was loved and known by many.  He accepted Jesus Christ as his Lord and Saviour and so we rejoice in the knowledge that he is now dancing in heaven free of pain and that we will see him again.

The Unger family extends their sincere gratitude for the many prayers and visits to grandpa, people who stopped by his condo to check on him, rides given to grandpa’s appointments, and meals provided.  We appreciate the prayers for family, words of encouragement, acts of kindness, and food provided during our difficult hour.

We extend our thanks to the staff at the Altona Hospital, with special thanks to the nursing staff, Dr. Bueddefeld whom grandpa appreciated so much, those in the Altona and District Palliative Care for the excellent care given to grandpa as well as the Home Care staff.  We also send out special thanks to Cancer Care Manitoba, South Central Cancer Resource, and Pastor Ron Gerbrandt.  The Unger family so appreciates all those who faithfully visited grandpa during this time – he often mentioned how grateful he was for you!  Also, thank you to Wiebe Funeral Home and all of those who helped with this memorial service.

A memorial service was held on Wednesday, February 22, 2017 at the Sommerfeld Mennonite Church, Altona.  A private family interment took place prior to the service at the Altona Cemetery.

For those who wish to make a donation in his memory, grandpa’s preference would be donations be made to Eastview Place or Altona Palliative Care.

To order memorial trees or send flowers to the family in memory of John W. Unger, please visit our flower store.