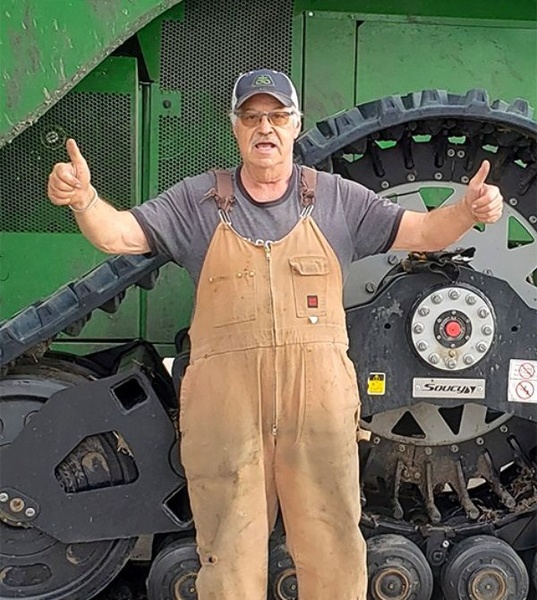 Our brother, Uncle and friend John Neufeld was born Dec 28, 1952 to Peter and Nettie Neufeld of Halbstadt, MB

John attended the Houson South school and the later grades in WC Miller Altona. John started farming with his parents and older brother Bill. After our parents moved to Altona John stayed on the family farm and continued to farm with is bother Bill. He built a new home in 1997 and totally enjoyed his home. Many friends and family frequented his home.

Four years ago John suffered a major heart attack and under went surgery which proved to be very successful and allowed him again to do what he loved…farming.

John enjoyed taking winter trips to Arizona with friends to do some golfing and relaxing. In his younger years he enjoyed fishing and snowmobile. But he really liked to curl and watch curling…in partiture women’s curling, never missed a game when Rachel Holmens team played…Emma the third was his favorite!

Aug 1 of this year John took the leap of faith and was baptized upon his confession of faith in Jesus Christ. Which brought him great peace. Family and friends where there to support him. He told his friend “this cancer journey is made easier with Jesus.”

Earlier this year Johns health began to fail and in May he was diagnosed with incurable lung cancer. But John remained optimistic and opted for treatments. He underwent radiation and chemo therapy.

But on Sept 23 he became very ill and was hospitalize …where he spent 10 weeks. Although he was well cared for in the hospital his desire was to spent the rest of the time he had left in his home. Then on Dec 8th he came home and spent his last 13 days at home. Until it became evident, he no longer could stay home and was readmitted to the hospital where he spent his last 20 hrs.

John left his earthly body and entered his heavenly home on Wed morning Dec 22, 2021 with family by his side.

John passed away at the age of 68 just 6 days before his birthday.

John will be sadly missed family and friends but we cherish his memories.

We the family would like to thank all those who supported him, drove him to appointments, came for visits and brought food.

We would like to thank the staff at Altona hospital, his care givers at his home, Silver Linings, and Palliative Care nurse. We have high praise for the care he received.

We are eternally grateful
May God Bless you all.

Donations in memory of John may be made to the Halbstadt Community Centre.

To order memorial trees or send flowers to the family in memory of John Neufeld, please visit our flower store.