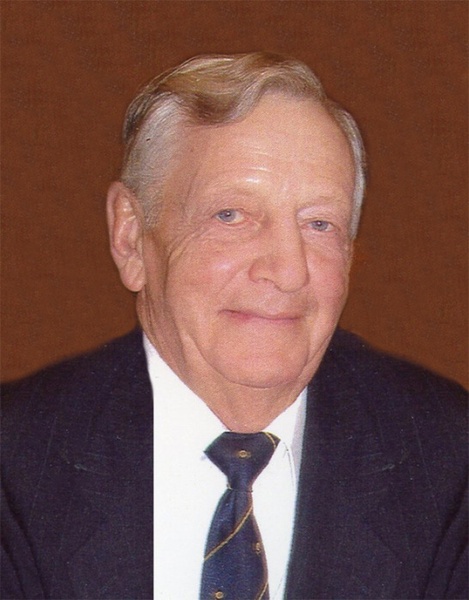 Johnny Kehler was born in Neubergthal on November 12, 1931 to Peter and Margaret Kehler (nee Klippenstein).

Dad grew up in Neubergthal, attending school there, and living and helping out on the farm with brothers Henry and Ben, and sisters Agatha, Henrietta and Anne.  His first job was in Winnipeg at the sugar beet factory and later for Manitoba Hydro. Already as a young man, his giving spirit was evident the very first Christmas he had a job.  All of his siblings received specially chosen gifts that year, with a very special doll for his niece.

Altona’s very own “Mr. Hockey” married Tina Teichroeb in September 1957,   an event that was preceded by a set of newspaper advertisements with mom and dad as models for local stores.

Their entire married lives were lived at the corner of 5th and 5th, and it was there they welcomed and raised their five children….. Mike, Carilee, Conley, Barry, and Jodi…..and then welcomed their spouses and of course the grandchildren and great grandchildren.

The early years also meant that neighbour kids were over at our house either skating on the backyard rink, up in the tree house, or around the fire…..and later years saw hours and hours of wiffle ball in the backyard,  and swinging on the swings with grandchildren.

Dad started his career in September of 1955 at CVO, later known as CSP and CanAmera….. working there until his retirement in 1994.

He also worked for Interstate Seed Company, and that allowed him to continue his connection with farmers and farming after his retirement from CanAmera.  Even though he was retired, dad kept wearing his work coveralls which became his standard everyday wardrobe for pretty much everything including golfing and watching baseball.

Sports were a passion for Dad, most notably playing hockey for Neubergthal, followed by his career as an Altona Maroon.

Number 7 was known for his skating ability….and even as a Maroon Oldtimer, people remarked that he out skated guys decades younger than him.  Skating was a part of his life until just recently.  We spent many winter gatherings and outings revolving around the Neubergthal skating rink, which he started making many years ago until this last November when he got the base layer of snow packed and ready for flooding.  It was important to him that all the kids in the village could have a good place to skate.  Just a couple of weeks ago, he asked if the broken water pipes at the community centre had been repaired, making sure that there would be running water to flood the rink next winter.

Baseball was another favourite sport, and Dad was thrilled to be recognized for starting the work on what is now widely regarded as the finest set of ball fields in Manitoba.  An article was written about this in the local newspaper on “How Johnny built his field of dreams”.

Along with playing sports, he loved to watch, or listen to the play by play on radio.  He followed his grandchildren’s athletic careers in person and would travel to many different places just to watch them.  He could also be found at afternoon curling league games here in town, or driving around southern Manitoba to watch whatever baseball or hockey game was playing.

Last Saturday... was his last trip out of the hospital, and it was to the ball diamond where he watched as best as he could, and kept his last scoresheet.  We will always remember him sitting by the outfield fence watching baseball no matter who was playing….with his lawn chair, umbrella, and cooler filled with chocolate bars, chips, and drinks in case any kids or grandkids joined him.

Dad loved to drive….whether it was going to Detroit Lakes for a few days, to Cavalier to pick up a frozen Tony’s Pizza, taking the scenic route on the way home from Winkler,  or just around town.

When the grandkids came along, they went with Grandpa on many outings to the golf course, going out to pick berries, checking the sunflower fields near Halbstadt, heading to the small cabin in the woods at the Marais, and of course, to Neubergthal.

Dad also drove in parades, pulling the CSP float with grandkids riding along listening to the songs “Sunflower” and “Thank God I’m a Country Boy”.

Travel was also a highlight for dad, with trips to Europe, Las Vegas, and Mexico with the Maroon Oldtimers…..and family trips to BC and Detroit Lakes, as well as some ski trips to Alberta.

If you were connected to dad in any way,  and you did something that led to an article in the paper….you can bet that article has been clipped out, photocopied, and put up in the house, or mailed to someone who he thought should read it.

Dad was a keeper of information, from genealogy, to weather records, to sugar beet tonnage on the farm dating back to 1968, to travel receipts, and hockey and baseball stats of all kinds.  His house and walls are filled with pictures, plaques, programs, hockey pucks, and baseballs that all had special significance to him, his kids, or grandkids.

Dad played guitar, and enjoyed many hours picking out tunes and singing old country favourites like “You are my Sunshine” and “Keep on the Sunny Side”.  When asked recently what his favourite music was, his reply was “all of it”.  In March he wanted to know who was going to the MCI musical Footloose.  Us thinking that maybe he didn’t know quite what the musical was about he replied that he had already seen the movie and it was “actually a pretty neat story”, and yes he went to watch Footloose.

Dad was a caregiver….He took care of mom in her final years at Eastview in his own special way.  Bringing her fresh strawberries, endless hours of watching curling together, and his multiple daily visits and games of rummy.  And as difficult for him as it was physically, he made sure that mom got to go to as many events as possible to watch the grandkids activities and attend family gatherings with us and with the Teichroeb family.

Each child, grandchild, and great grandchild has their own memory of treats or special packages from grandpa….whether it was a McDonald’s apple pie, a handwritten letter and newspaper clippings in the mail, a package of notepads, corn on your doorstep, chocolate bars and juicy fruit gum waiting on the kitchen table, or a “ventura” float as dessert after a school day lunch.

It was in the act of caring for others that he shared his faith, often in an unassuming way.  He lived out his faith by showing compassion, donating to many faith based causes, serving others with Meals on Wheels, and by reading and sharing faith based periodicals.  Other ways he shared his faith were with notes of encouragement, a question of concern about finding a good church to be comfortable in, and by humming along to favourite hymns.

It has been heart-warming to hear all of the stories and well wishes from so many people who have been a part of dad’s life.

From the border crossing guards at Neche, and the folks at the Neche post office, to former baseball and hockey team mates, competitors and fans, siblings and in-laws, and people who grew up with the Kehler kids sharing so many memories of all of the little things dad did that made them smile.

We are so grateful to Dr. Basta and the staff at the Altona Hospital for their care and concern for dad, and to the cardiology department at the St. Boniface Hospital.  We are also thankful to Palliative Care for creating such a warm and welcoming place for the family to gather in Dad’s final days.

Finally, thanks to all of the family and friends who made sure that Dad had food, companionship, and outings to look forward to, and have visited and shared stories with us in the last week.

Dad said he had a good life.  He was active and healthy until this last year.  He travelled a lot with his family and with mom….enjoyed his work… and was quietly but fiercely proud of his family.  In his children, grandchildren and great grandchildren his legacy lives on.

In our crew….because of dad….we have historians, memory keepers, athletes, sports fans, music lovers and musicians, travellers…..and more than a few of us….like to take “the scenic route”.

Funeral service was held on Monday, May 21, 2018 at the Altona Bergthaler Mennonite Church with burial at the Neubergthal Cemetery.

Donations in memory of Johnny Kehler may be made to the Neubergthal Heritage Foundation.

To order memorial trees or send flowers to the family in memory of John "Johnny" Kehler, please visit our flower store.