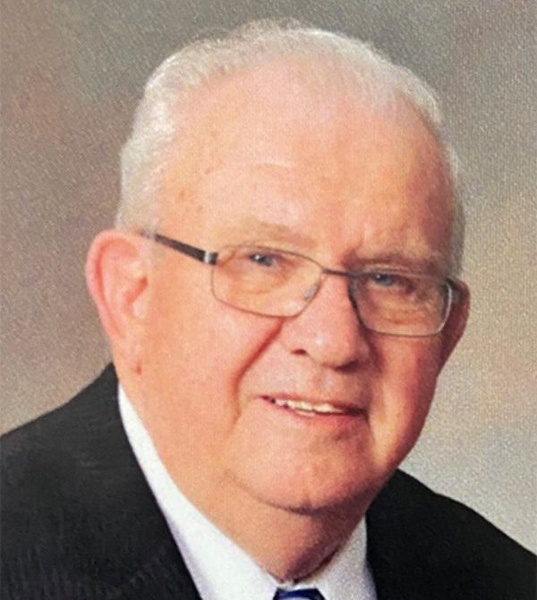 On February 3, 2022, at the age of 86 with family at his side, John Dyck passed away at Eastview Place in Altona.

John was born December 27, 1935 to Peter and Sarah Dyck at their home in Hague, Saskatchewan. He was the youngest of six children. He left this childhood home at the young age of about 15 to work as a farm laborer in Saskatchewan. It was shortly after this that he made the move to Manitoba. He first worked on a farm in Western Manitoba before coming to Neubergthal, to work on the Klippenstein dairy farm. They became like family to John. It was while working here that he made regular excursions to Altona and met Kathy Stoesz, who would become the love of his life for 64 years. He was baptized on the confession of his faith in Jesus Christ at the Altona Bergthaler Church in June of 1957. On September 7, later that year, he married his sweetheart, Kathy. They began their life together living in Altona. But the country was calling, and in 1963 they moved to an acreage in the Altona Village. It was here that they would raise their family. It was amazing how productive that yard would become. Raising cows, pigs or chickens and big gardens kept them busy in addition to regular jobs. They lived in the village until 2010 when they moved back into Altona. They lived in this home together until 2018 when John moved into Eastview Place.

John had a variety of jobs as he provided for the family. He loved working on the farm, but a week after getting married he began working at Coop Vegetable Oils (Bunge). He had several positions there with the last three years as a supervisor. Wood and building things with his hands were passions of John. Working for the next four years at Chimo Building Centre was a great opportunity to work with products he enjoyed. For the last 16 years of his working career, people would see his smiling face as the mailman of Friesen Corporation.

Throughout his life, John enjoyed hobby farming, gardening, and woodworking. His retirement in 1995, gave him more time to give to these hobbies and travel with Kathy. Many of his children and grandchildren have his handiwork in their homes. When Alzheimer’s began to steal his mind and he was no longer able to do the woodworking, he picked up knitting. He made numerous scarves and toques for friends, loved ones, and MCC. He also enjoyed doing word search’s and playing Skipbo - you could not visit him without playing a game.

John’s faith was very important to him and an integral part of his life. For many years, John served as usher and together they served as deacons at the Altona Bergthaler church. His warm, gentle genuine nature was shown in these roles. They had a gift for making people feel welcomed. They also worked behind the scenes as custodians for five years. Their Bible study group was an important part of their life as well.

He was a man with a great sense of humor and loved a good joke. He was hard working, friendly, outgoing, and loved to meet new people and make them smile. He will be greatly missed by many who knew him.

He was predeceased by his parents, Peter and Sarah Dyck, his sister Helen, four brothers; Jake, Peter, Bill, and Dave, a brother-in-law Peter (Helen) Friesen and sister-in-law Mary (Bill) Dyck.

The family would like to thank the Blueridge staff at Eastview Place in Altona for their care over the last three years that John lived there. We are grateful for the many prayers, words of encouragement, gifts of food and flowers.

As an expression of sympathy, if friends so desire, donations may be made in John’s memory to the Alzheimer’s Society of Manitoba, or a charity of one’s choice.

Funeral service will be held on Monday, February 7, 2022 at 2:00 p.m. at the Altona Bergthaler Mennonite Church.  The service is open to all who are fully vaccinated.  Interment will follow at the Altona Cemetery.

Viewing will be at Wiebe Funeral Home Altona on Sunday, February 6 from 4:00 - 9:00 p.m. and at the church prior to the service.

To view the funeral service, click on the video link below.

To order memorial trees or send flowers to the family in memory of John Dyck, please visit our flower store.
Send a Sympathy Card

Attendees must be fully vaccinated