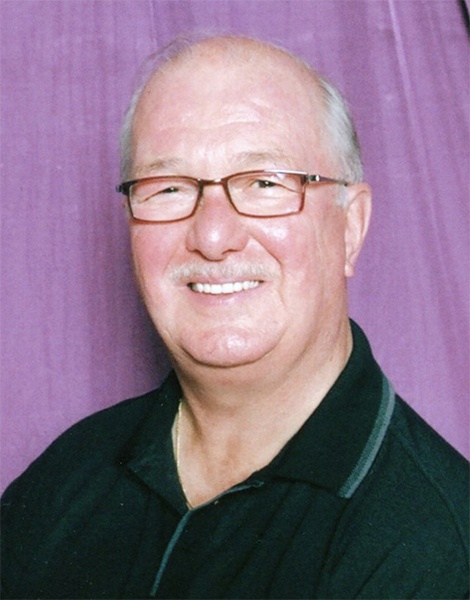 He was predeceased by his parents George & Tina Dueck and by one brother.

Also left to miss him are five great grandchildren, 3 brothers, 10 sisters and many nieces and nephews

He attended the Thames school until he was needed to help on the family farm.  He remained living on the same homestead until he left home at the age of 20 and moved to Winnipeg

He met the love of his life Nettie Zacharias, later that year and they were married July 27th 1963 at the Altona Bergthaler Church.  This was also the year that he was baptized upon confession of his faith.

They made their home in Winnipeg for 5 years where Dad worked at Coop Implements.   In Oct of 1968, shortly after Daryl was born, they moved to Altona.  Dad started at D.W. Friesens immediately but after 6 months left to operate the Gulf garage with his brother in law.  A year later however, his partner left to pursue other employment and Dad went back to Friesens and finished his 31 year career there in 2001.  Moving from the mailroom to Shipping and Receiving supervisor for the last many years.  After having Daryl in 1968, they had Corinne in 1971 and Janice in 1975.

Dad would be described as quiet by his family but likely differently by coworkers.  He worked hard and sacrificed much of his family time to make sure we were provided for and never needed for anything.

Dad didn’t make much time for his own interests or hobbies either. Vacation time was precious and many family road trips were taken.  Trips to BC, Alberta and SK to see family and the sites.  Picnics in parks and rest stops along the way.  Camping trips to Falcon Lake with friends or Detroit Lakes were also taken.

We were also fortunate as kids to get to experience many Jets games, Maroons Games, yearly trips on the Winnipeg River boats, rainbow stage, concerts and hotel weekend.

Mom and Dad had a seasonal camp site in Portage for many years and also started travelling to Yuma before retiring and had plans of becoming snow birds but Dads health started to fail soon after he retired and a lot of their dreams changed.  Dad had his first heart ablation surgery in 2009 followed by a second in 2011 that he never quite recovered from.  We found out in 2018, when he had a stroke that there were signs of previous ones.  Coupled with his bad knees’ mobility became an issue for him and limited his outings and social life.  On Monday morning, which started like any other, Dad suffered an aneurism that led to a large brain bleed and he was ultimately relieved of his earthly pain and was embraced by the arms of his loving Heavenly Father at 5:53pm.

Donations in memory of John may be made to STARS Air Ambulance.

Click on the video link below to view the Funeral Service.

To order memorial trees or send flowers to the family in memory of John Dueck, please visit our flower store.