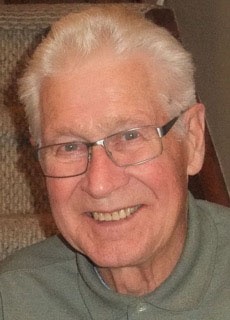 Johnny Heide, resident of Altona, Manitoba, previously of Gretna and Pilot Mound, Manitoba, passed away peacefully at the age of 86 in Altona Medical Centre on Saturday morning November 22, 2014.

Johnny was born in Gretna on April 17, 1928 to Peter and Anna (Heinrichs) Heide.  He was predeceased by his older sister Katherina (infant) and younger sister Anne-Marie (age 5) and his beloved wife Betty (Toews) of 57 years on September 18, 2008, as well as two brothers-in-law (Ben and Elmer).

The funeral service was held on Friday November 28, 2014 at 2:00 pm at the Gretna (Bergthaler Mennonite) Church with Pastor Peter Redekopp and Harold Schlegel officiating.  Burial followed at the Gretna Cemetery with Johnny’s 4 sons and two grandsons as Pallbearers.

To order memorial trees or send flowers to the family in memory of Johann Heide, please visit our flower store.