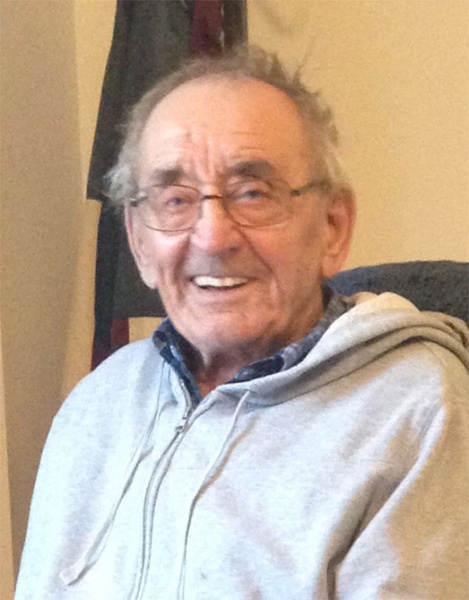 Jake Schmidt of Altona, passed away peacefully on Friday, January 13th at Altona Memorial Health Centre at the age of 89.

Jake developed an interest in excavating and began digging basements by hand for surrounding areas. He borrowed money to buy his first tractor and hauled ice blocks for melting-water as needed. He started his own company in 1949 for sewer/ water excavating and snow clearing.

Jake married Susanna Hildebrand on November 12th, 1950 with only $5 to his name. They lived in a house/barn until he purchased their first home from brother Abe and moved it to it’s current location in early spring of 1951. It has remained in the family since then, with grandson Aaron currently living in it. Jake and Susanna had 6 children between 1951-1969.

Work was a priority for Jake, but he always made time for family. Family camping trips, fishing and card games were some favorite pastimes. This love of camping and fishing lead to the purchase of a great cottage at Betula Lake in June of 2007.

In 2010 Jake developed congestive heart failure and got weaker over time. The stroke he had a few years later forced him to retire completely.

In 2014 Jake and Sue moved to their new home in Otter Falls, where they enjoyed many relaxing days birdwatching and feeding the wildlife that entered the yard. Due to failing health, they moved back to their hometown of Altona in April of

2016. Jake moved to the Altona Hospital in October where he remained until his passing.

The family will miss all of Jake’s stories and the time spent together making memories. He had a heart of gold, quick wit and great sense of humor. He was a blessing to many people over the span of his lifetime.

The family would like to thank the Altona Memorial Hospital for the excellent care given and kindness shown during Jake’s stay there – with special thanks to Dr. Mahdi, Dr. Dueck and Dr. Beuddefeld and their staff, especially Doreen Klassen who made a big difference in his life. Thank you to The Gardens on Tenth staff, especially Pete Friesen for continuously helping make Jake comfortable in transitioning to his new homes. Thank you to the family members in Altona who were there to help when needed. And a very special thank you to the many friends and acquaintances who stopped by to visit and help brighten his day. Finally, the family would like to thank Wiebe’s Funeral Home and all those who helped with the memorial service for making this day possible and providing support and encouragement through this difficult time.

Celebration of Life service was held on Saturday, January 21, 2017 at 2:00 p.m. at the Rhineland Pioneer Centre, Altona.

Donations in memory of Jake Schmidt may be made to the Alzheimer Society, or the Heart and Stroke Foundation of Manitoba.

To order memorial trees or send flowers to the family in memory of Jacob A. Schmidt, please visit our flower store.