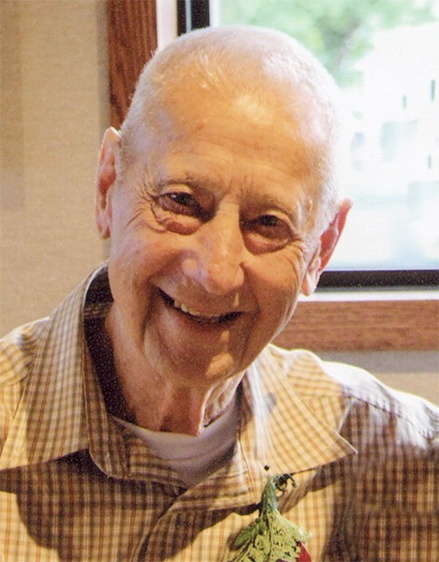 At the age of 92, Dad went home to be with his Lord and Saviour.

Jack was predeceased by his loving wife Helen, his parents Peter and Sarah Toews, his brother Clarence, and his sisters, Lenora and Betty.  He is survived by his brother Jim and wife June, his sisters, Florence, and Myrna and husband Don Engie, and sister-in- law Mary Toews.

Jack’s memory will be cherished by his daughter Kris Solomon and husband Vincent and their son Daniel; son Jack and wife Alice and their children Jeffrey & Victoria, Jackson, Richard & Amy, Ezekiel, Ada and Curtis & Meagan; son Robert and wife Heather and their children Elizabeth, Rebecca, Noah and Malykai.

Dad was born on March 11, 1928 at the St. Boniface Hospital in Winnipeg.  He grew up in and around the town of Gretna, moving several times.  Dad was the oldest of 7, having 2 brothers and 4 sisters.  He always looked out for them.  Even after heading out on his own, Dad often sent home money or gifts for the family.

Dad enjoyed school, especially English and history, and was involved in many school dramas.  He was editor of the school newspaper, which he named the ‘Magnum Opus’, the Great Work.  Dad was interested in becoming a journalist, but family circumstances led to his leaving school after grade 11 to begin working.

Throughout his school years Dad always kept busy making some extra cash.  He mowed lawns, hauled ice from the river, shot and collected gopher tails, and worked for various farmers and uncles.  He learned many valuable lessons.  One such lesson was:  Confirm your wages before beginning a job.  On one occasion, after working several weeks for a farmer, Dad received one large sack of hazel nuts.  As you can imagine, he was not pleased.  To avoid lugging the heavy sack, Dad hitch-hiked home.  The result?  Several weeks wages lost after the man who gave him a lift took the hazel nuts as payment.

After leaving school Dad worked mainly in construction.  At 17 ½ he went to work at Service Construction for his uncles, Johnny and Jack Broesky.  Dad was paid 40¢ per hour and worked for them for 2 years.  When he asked for a raise, Uncle Johnny wouldn’t go for it, so Dad quit.

With 12 bucks in his pocket he went to the railway station and bought a ticket to Armstrong, Ontario, located about 200 miles north of Thunder Bay.  When Dad stepped off the train, he had no money so he ate frozen berries and lived at the train station to keep warm.  At the local diner, Dad paid a nickel to get a bowl of hot water into which he mixed ketchup and a few crackers.

A few days later, a train with the B&B gang came through town and the boss hired Dad for 90¢ per hour.   The B&B Gang was responsible for maintaining bridges, buildings, water towers, and culverts.  These men lived in bunk cars along with a cook car, water car, dining car, and tool car.

During Dad’s last year with the railway, he worked for the Paint Gang.  During this time Dad decided to change his life of drinking and wasting his money.  He sent his cheques home to his mom who put them into his Credit Union account.

In 1949 Uncle Jack Broesky asked Dad to come work for him at Service Construction.  Dad worked for him for the next few years during which time he became foreman of his own crew. Dad changed jobs again in 1952, working for Imperial Oil in the St. Boniface refinery as a control room technician.

In 1960 Dad was offered a job with E. S. Jonasson as office coordinator and manager in Calgary.  He would prepare bids and organize the crews, material, and schedules for gas and bulk fuel station projects.

After a few years, Dad was told he was being replaced by a university graduate.  He would have to go back to working as a crew foreman.  In 1963 Dad resigned and joined Keller Construction as a partner.

Service Construction went up for sale in 1964.  Dad bought the company and moved back to Winnipeg.  After operating for a few years, Dad had financial trouble when the main contractor, responsible for building two Texaco stations in Winnipeg, went bankrupt.  The banks stepped in and Dad, as a subcontractor, was not paid for the work he had done.  These were hard times, dealing with phone calls at home, from upset suppliers who wanted their money.

Looking back, Dad said the easy way would have been to declare bankruptcy, but he said it wasn’t fair for those people not to be paid.  So he kept up his payments, and after several years we were debt free.  These events drew our family closer together.

In 1970, Ed Jonasson of Centcom Construction heard about Dad’s difficulties and offered him his old office job.  Dad countered with an offer to work as a construction foreman on the road and Ed accepted.  Dad closed up Service Construction and worked for Centcom for 26 years until he retired.

Dad worked all over western Canada:  In every city and in many small towns too; from Queen Charlotte Islands on the west coast to Tuktoyaktuk on the Arctic Coast, and all places in between.  He knew something of almost every town in western Canada.  Dad enjoyed sharing personal stories about his experiences working in these towns.  He had an amazing memory for detail, including people’s names.

Both sons, Jack and Bob, had opportunities to work on the road with Dad.  They learned many skills and life lessons that would benefit them later in their careers.  Dad also supported Kris in her nurses’ training and throughout her career.  The Lord blessed Dad in that Kris would become Dad’s super-caregiver.

Dad retired from his construction work in 1995 at the age of 67, but his adventures live on.  Dad was a fantastic storyteller and we loved to hear the tales of his exploits.

In 1996, with Mom’s encouragement and the support of his good friend, John Brown, Dad was elected to the Gretna town council.  He remained on council for the next 12 years, being in charge of Public Works.  Dad’s surveying and construction skills, as well as his ability to bring people together, contributed to the completion of many town projects.

Dad always had his eye on that ‘Heide girl’, Helen, and pursued her attention until they were married on December 12, 1954.  They were made for each other.

While working in the Queen Charlotte Islands, Dad was often separated from Mom for over a month at a time.  His boss suggested that Mom fly out to spend time with him.  Dad said when the float plane docked, the last person off was the most beautiful woman in the world.  And he always felt that way about her.

Mom’s faith and strong will were necessary to raise their children while Dad was away from home for weeks at a time.  He was committed to his family, calling home frequently.  Mom & Dad had a system to check on each other.  Dad would call collect and the operator would ask if we would accept a call from “Mr. Fairweather.”  If everything was going well at home, we would not accept the call.  If we needed to talk to Dad, we would accept the call.  As I said before, at that time, money was tight.

Dad always showed interest in each of us.  When he came home, Dad wanted us to update him on everything that he had missed.  Dad wanted all of us, including his grandchildren to grow up to be strong in faith, independent in thought, and skilled and diligent in our work.

Mom and Dad loved travelling together, whether it was a long journey to Phoenix or a shopping trip to Winkler.  They especially liked to drive west to visit family.  Mom & Dad delivered Leisure Vans to B.C., Ontario and even Pennsylvania.  What a great way to travel and get paid for doing it.  In the last years, Dad enjoyed rides in the Gretna, Altona, Winkler area, reminiscing and acting as tour guide.  A highlight was stopping at Dave and Rita’s to catch up on local current events.

Dad liked to curl and golf.  He always enjoyed a round of golf with his brothers, sons or grandsons at the Oakview Golf Course, where he was a member.

Dad was an avid reader, which, together with his countless experiences, resulted in a wealth of knowledge.  His interest in politics and current events led him to be a lifelong reader of the print newspaper.

Mom and Dad thought they would live in Gretna until that day when they would die together in a spectacular car crash.  Those of us who drove with Mom thought that just might happen. She liked to go fast.  So when Mom & Dad wanted to make time or get somewhere in a hurry, Mom drove.  Dad just ended up getting speeding tickets.

After Dad’s health had declined during 2016, the maintenance of the house and yard became too difficult for them.   In November, Mom & Dad moved to Buffalo Place in Altona.  They loved it there and especially enjoyed Jim and June’s close company.

Both Mom and Dad’s health continued to decline.  In January 2018, Dad was admitted into the Altona Hospital where Mom joined him in April.  For a short time they were together again.  Mom’s condition deteriorated quickly and she entered her heavenly home on June 28.  They were married for 63 years.  Dad greatly missed the love of his life.

In October 2018 Dad moved into Eastview Place, Altona’s personal care home.  His sense of humour, and fun-loving, teasing manner quickly endeared him to the Eastview staff and residents.  Dad truly appreciated and loved them as well.

Dad loved visits he received from family, friends and church family members.  Dad had a special place in his heart for his grandchildren and three special great-grandchildren.  These were his favorite visitors.

The COVID-19 pandemic, with restricted visits, made for a difficult time for Dad.  Once the weather warmed up, and outdoor visits were allowed, Dad fully enjoyed seeing his family again.  Please pray for Eastview Residents and Staff as well as all other personal care homes during this difficult time.

We, as a family, are thankful for the compassionate care Dad received from the Eastview Staff.  He considered both the Eastview Residents and Staff as part of his family.

Dad’s faith increased as his health decreased.  Even while going through difficulties of his own, Dad prayed with and comforted his fellow residents.  Jesus was the answer for any problem he or others might have.  The Lord provides.

Dad’s character and faith remained strong to the end.  After rapidly declining health, Dad entered his heavenly rest on September 25.

In lieu of flowers, donations in memory of Jack may be made to the Gretna Bergthaler Church, or to Eastview Place.

To order memorial trees or send flowers to the family in memory of Jack Toews, please visit our flower store.