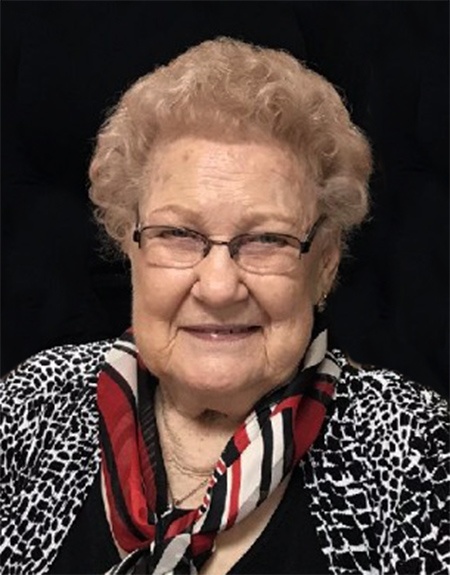 On Wednesday July 03, 2019, our beloved Mother, Nana and Super Nana passed away peacefully with family at her side at the Emerson Personal Care Home at the age of 88 years old.

Dolly was born on July 10, 1930 in the Ridgeville area.  She was predeceased by her husband of 49 years, Herbert, in 2000, her parents, Julius and Martha Ratchinsky, Sisters Adeline (Ralph) Wendeborn and Lillian (Gerhard) Schultz.

Dolly lived her childhood years in the Ridgeville area where she was baptized and confirmed into the Lutheran Church and attended the Ridgeville School.  She moved to Winnipeg to finish her last two years of high school at Gordon Bell High School where she graduated and then attended Teachers College to pursue her love of teaching.  While teaching in the Friedensthal area, she met and married the love of her life, Herbert Rodewald on September 29, 1951.  She became a farmer's wife but continued to teach school as her family grew. She became very busy helping Dad run the farm and raising their children.  In 1969, she completed her studies and received her 1st Class Teacher's Certificate,  She became a substitute teacher at the Emerson School for the next 15 years.  She worked for Canada Post for a number of years and then decided to work on completing her Customs Brokers Licence where she became the manager of KN Customs Brokers until her retirement.

Dolly and Herb travelled extensively thru out their 49 years of marriage.  Together they visited many destinations in Canada, the United States as well as Hawaii, the Caribbean, and Europe.

A special thank you to Dr. Antonious, Dale Buhler and the nursing staff at the Emerson Personal Care Home and to Terry Wiebe and his staff for their help, compassion and comfort during this difficult time.   A funeral service was held on Monday July 08, 2019 at the Emerson St. Andrews United Church. In lieu of flowers, donations may be made to the Emerson Health Centre.

To order memorial trees or send flowers to the family in memory of Irene "Dolly" Rosabell Rodewald, please visit our flower store.