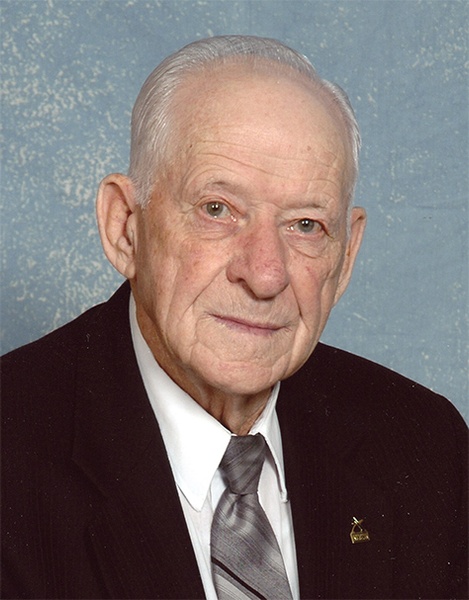 On January 15, 2021, Henry Rempel of Eastview Place in Altona peacefully passed on to be with his Lord and Savior.

Dad was born to John and Anna Rempel on November 28th, 1923, at Edenthal, Manitoba. Dad's Family later moved to the Village of Sommerfeld. On August 14, 1955 Dad married Eva Nickel, and together they took over the Family farm. Mom and Dad raised their 3 boys on this farm, and there was never a lack of chores to be done. From collecting eggs to milking cows, feeding the pigs and cleaning out pens. Getting grain crops in the bins and hoeing seemingly endless rows of sugar beets.

Dad loved music, and learned to play guitar at an early age. This passion remained with him all through life. On many occasions He would play guitar, and Him and Mom would sing, and these music sessions were often recorded on a reel-to-reel tape recorder. Later these were transferred to cassette tapes and finally onto CD's. And that is awesome because these recordings are with us to this day. Right around 1970 Dad and a few others formed a band, were invited to play at a local fundraiser and THE HALFTONES were born. As years went by this eventually evolved to the last band Dad played with, THE SILVER STRINGS. Their Gospel music brought so much joy to so many people. They would record and sell CD's, and Dad's phone number was on the sleeve insert. One day Dad had a call from a fellow who asked if they had more CD's available. Turns out this guy was a Mr. Roger Valentine, a trucker from South Carolina, and they formed a lasting friendship.

Fishing was another of Dad's favorite pastimes. He would go dip-net fishing in Westburn, fish at the Red River, and when Jerry bought a fishing boat, well, that just took things to a whole new level. Jerry would often take Dad and a friend for a day of fishing, and Dad would get so excited. Many times He told Jerry how He could hardly sleep the night before!

Dad was an avid photographer and loved taking pictures. Hundreds and hundreds of slides, including the early years in Sommerfeld, like harvesting sugar beets, the pictures of our family around the farm, group photos of our Aunts and Uncles as well as many of our cousins. All of these are such precious memories of days gone by.

In 1980 Mom and Dad retired from the farm and moved to Altona. Mom was already working at Ebenezer Home at that time, and during the next number of years Dad started working part time at various things. A summer was spent with Sawatsky Appliances helping his Brother-in-law Henry install home air conditioners, Dad worked a few Fall Seasons at the Altona Beet Piler in the Tare Shack, and also worked a while at West Park Motors cleaning the front offices and showroom area.

A Funeral Service was held on Monday, January 18 at the Sommerfeld Mennonite Church in the Village of Sommerfeld, with Interment at Altona Cemetery following the service.

The Family would like to thank Minister Jeff & Julie Hildebrand, Wiebe's Funeral Home, and the staff at Eastview Place for all the care & support Dad and our Family received.

To order memorial trees or send flowers to the family in memory of Henry W. Rempel, please visit our flower store.