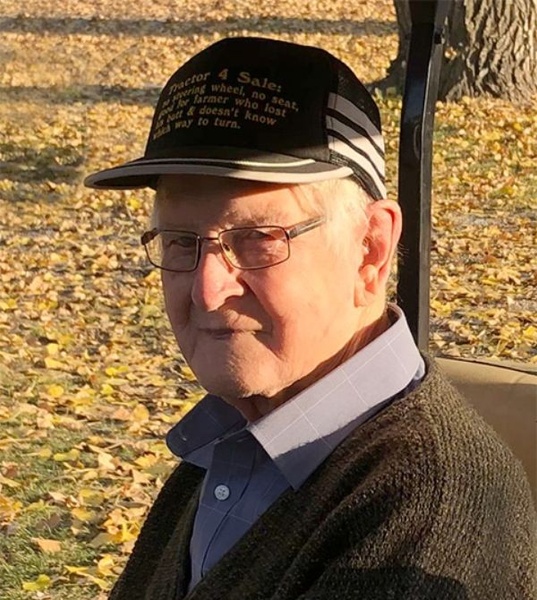 Henry was born the eighth child of Cornelius G Stoesz and Elizabeth (Giesbrecht) on January 31, 1927 on the farm in Thames (Bergfeld). Henry attended school at the Thames school. He made his decision to follow Christ in his later teens, around the time of his mother’s death. That decision was the driving force in his entire life; to follow and serve Christ and lead his family in Gods way. He was later baptized on the confession of his faith on May 25, 1947. On September 18, 1949, he married the love of his life Tena Giesbrecht, and soon moved to Winnipeg to become a carpenter for nine years. Henry and Tena were married for 68 years till Tena passed on December 29, 2017.

While in Winnipeg they were blessed with three boys, Denis, Tim and Darrell. Dad’s dream to farm had always been alive and in 1959 he purchased the home quarter from his Dad and moved the family to the farm. Dad continued to supplement the farm income with building cabinets and included the boys in the work. In the early 60’s they welcomed some foster children into the home and Alison stayed.

In 1990, Mom and Dad made the move to town, however that did not change Dad’s desire to work on the farm. I am not sure when he officially retired because he was there a lot. In 2015, Mom moved to Eastview and Dad moved to the new Gardens on Tenth. It wasn’t too long till he needed more care and moved to the Apartments, and later to Eastview. Dad was appreciated everywhere he went for his good attitude and friendly nature.

He passed on to be with his Lord and Savior surrounded by his loved ones on November 11th, 2021.

Henry was a people person and served in many capacities throughout his life. Some of his commitments were to Bergfeld church, serving on the R.M. of Rhineland council, the Food Grains Bank as well as Mennonite Disaster Service.

As his responsibilities on the farm lessened he was able to enjoy his hobbies more. He spent many hours in the wood working shop building every thing from John Deere clocks, birdhouses, furniture, games and many gifts for his grandchildren as well as great-grand children.

Henry loved to travel, more than his wife. He would’ve liked to go everywhere but some of the places they made it to were Hawaii, Mexico, California, Alaska, the East Coast and the West Coast many times. For many years they would manage to go West during the apple season and bring back a truckload of apples back for all who wanted. On one occasion he filled the entire car trunk with hundreds of pounds of Spartan and Macintosh produce, praying they wouldn’t need the spare! He never shared this fear with mom because she would have worried the entire trip!

Henry was a generous and grateful man. Grateful for all who came to visit him and all those who cared for him at Gardens on 10th, The Apartments and now in the last year at Eastview personal care home. During these covid times we would joke to him about “breaking him out of prison” but he would have none of it. He would adamantly respond by saying “This is not a prison, this is my home”. He felt loved and taken care of by all and shared his appreciation.

If you desire to honor Henry’s life with a gift, please consider donating to The Food Grains Bank. Cheques can be made to CHUM (our local chapter), in the memo line- In memory of HG Stoesz. Please send to P.O. Box 357, Plum Coulee, R0G 1R0.

Graveside service was held at the Bergfeld Cemetery on Sunday, November 14, 2021.

To view the graveside service and or the video tribute for Henry G. Stoesz click on the video links below.

To order memorial trees or send flowers to the family in memory of Henry G. Stoesz, please visit our flower store.