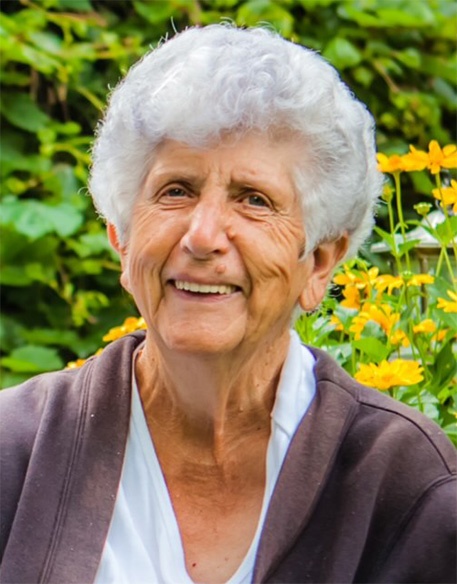 Mom, often referred to as Hetty, married our dad, David A. Braun, on June 12, 1954. In 1957, mom and dad were baptized together in the Bergthaler Church in Altona. They had eight children. Loren (Suzanne), Cliff, Brad (Karen), Don (Laura), Vera (Conrad) Voth, Verna (Wes) Schroeder, Ramona (Bill) Henschel, Bruce (Leanne), as well as 13 grandchildren and 16 great-grandchildren. Mom and dad lived in Neubergthal, raising their family there for about 20 years before moving to town in 1977.

The years on the farm were very busy and a lot of times very hard for mom. With Dad being blind, she was at his side for large parts of the day, helping with the chores on the farm and then in later years, helping with the grain bin business. And this was on top of all of her day to day responsibilities in raising a large family. We have many memories of walking in the door from somewhere and smelling fresh baked bread, which was a twice weekly occurrence for most of our upbringing. Add laundry, mending, cooking and gardening, and always all the driving to her day and it’s hard to believe she ever had time for hobbies. But she managed to make time for some. Mom used be very good at and loved embroidery and for years she was a very talented Tri-Chem paint artist. A local Tri-Chem dealer would take Mom along to parties sometimes to have her demonstrate how artistic you could be with these paints.

In later years, mom was a voracious reader, crocheted blankets for all of us, as well as Christmas ornaments. She baked so much for so many years after moving to town. There were always birthday pies, as well as pans of cinnamon buns, and loaves of bread, always for giving away. There was a period of time when the grandkids were in sports, that she was constantly baking pies for goals scored and homeruns hit. She loved attending hockey and ball games of grandkids and cheering them on. She often had to debrief with one of the kids later about a particular play in the game. Still later, mom took to word searches. You could walk in her door and see her working on a WORDsearch most days, and in winter, watching curling on tv. And driving and going for coffee, oh how our mom always loved to drive, especially taking drives out into the country and checking out her old stomping grounds. It was very hard having to tell her that it was no longer safe for her and asking her to stop driving late in 2018.

Mom worked outside of the home in a few different jobs beginning in 1977, her first job being a cook’s helper in the kitchen at the hospital. She held this job for over 10 years, and then spent the rest of her working years up until retirement in the kitchen and housekeeping at the local hotels.

In January 2019, Mom moved into the ebenezer Manor. Sadly, this was not to be a long stay. By October her decline in health was such that she couldn’t manage on her own anymore, and she became a permanent resident at the hospital until finding placement in a care home this past July.

This past year was hard for Mom and her family, too many moves and changes, and so many restrictions. She voiced often during this time that she was ready to move on. But, we were assured so often by the caring staff at Emerson, that she was content and still very sassy and often had them laughing with her comments.

Mom was pre-deceased by our dad in March 1995 after 40 years of marriage, as well as three brothers. She is survived by all of her children and their families, two sisters and many nieces and nephews.

Although we know our mom is in a better place, there will be a very large hole for a very long time in our lives. In the words Mom often spoke, ‘This too shall pass and life be sweeter’. Rest In Peace Mom, until we meet again.

A private funeral service will be held with burial at the Neubergthal Cemetery.  Viewing will be at the temporary location of Wiebe Funeral Home Altona (42 Centre Ave.) on Thursday, March 18, 2021 from 1:00 - 7:00 p.m.

Donations in memory of Henrietta may be made to the CNIB (Canadian National Institute for the Blind).

To order memorial trees or send flowers to the family in memory of Henrietta Braun, please visit our flower store.