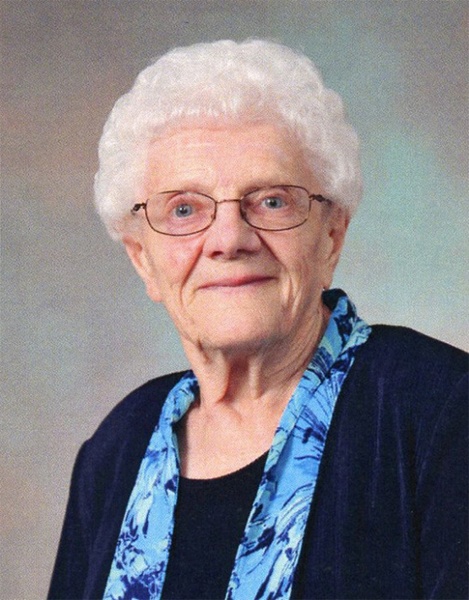 During her teen years, she would help families with childcare and gardening. As she grew older, she worked in the fields husking corn, hoeing and topping beets. She also worked in the kitchen at Elim  Bible School (1981-1983) and at Ebenezer Home (1983-1994). She helped her husband Ben paint/varnish cabinets and painted several barns. Mom always helped dad with farming.

Her hobbies included knitting, crocheting, puzzling, skating, playing baseball and table games (especially group kenasta). Everyone in the family got an afghan until her hands prohibited her from knitting. After her retirement, she volunteered at Ebenezer, MCC, The Manor, and Center Point Plaza. She drove many people to appointments and events. Over the years, she was involved in church activities such as Cradle Roll, choir, S.S. teaching, Bible Studies, and Ladies Service Groups. She especially enjoyed her three bus tours to the United States. Lately, she was our historian.

Due to Ben’s failing health, they moved from Neu-Bergthal to Altona in November, 1984. The hardest thing for her was to move to Centre Courts on September 24, 2011 as this was her first move to a new residence without her husband. She missed the garden, but enjoyed the company of the residents in the apartments.

Helen enjoyed good health except for a broken ankle, shingles, and a few episodes with an aneurysm since 2013. She passed away suddenly but peacefully on July 26, 2018.

She was predeceased by her beloved husband Ben (July 24, 1990), her parents, 2 sisters, 1 brother, 11 in-laws, and many relatives and friends. She is survived by her daughter Leona and husband Niel Rempel, 3 grandchildren, and 12 great-grandchildren who are as follows:  Sharon (Dan McCutchin), Tatjana and Liam; Sheila (Trevor Braun), Jesse, Teona, Bethany, Janessa, Justen, Cecilia, Shantelle, and Shaelynn; Sheldon (Lisa) Rempel, Cole and Clay. Also surviving her is one sister, three sister-in-laws, many nieces and nephews, and friends.

We love you! Your presence, faith, prayers, love, support, and numerous conversations will be greatly missed. Our parting is but for a little while. See you in heaven. Enjoy your new life with the Lord, Ben, and all those who have gone before you, and will come after you.

Funeral service was held on Tuesday, July 31, 2018 at 2:00 p.m. at the Altona Bergthaler Mennonite Church with burial at the Neubergthal Cemetery.

Donations in memory of Helen Kehler may be made to Union Gospel Mission.

To order memorial trees or send flowers to the family in memory of Helen Kehler, please visit our flower store.